Today’s FOMC meeting was the catalyst for much of the volatility we’ve seen in the stock market as of late, and it doesn’t look like that volatility is going away any time soon.

Though stocks rallied at the initial release of the notes (2PM EST), the market has given back all of those gains and more, ending up in the red despite a strong start to the day. The Nasdaq, which was at one point up more than 3%, is currently trading negative on the day.

This mirrors the sort of record-breaking reversal we saw last Monday, when the DOW Jones dipped as low as $33,150 before staging a historic 1214 point turn around. That wasn’t the only record-breaking market-moment this month. According to Bloomberg and Ned Davis Research, this has been the worst January in history for the stock market. 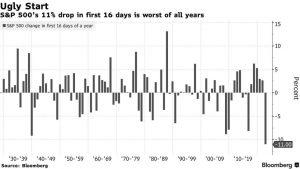 So what did Jerome Powell say that caused the market to make such a U-turn?

Likely, it wasn’t the taper announcement. The fact that the Fed will be tapering its asset purchases has been clearly forecasted for essentially the entire pandemic. While not all investors are on board with the timing and pace of the taper, this is likely not what caught the market off-guard.

It likely wasn’t the rate hike announcement, either. Real rates are still near 0%, and going into this meeting the consensus was that at least three rate hikes would be on their way in 2022. Some, like JPMorgan’s Jamie Dimon, have taken this much further, with the CEO indicating that he believes the Fed could raise rates “7 or more times”. Powell’s comments did not indicate any increase in the rate-hike cycle, and weren’t particularly descriptive about timelines or pacing past March.

This non-specificity was likely intentional, and is a staple of these FOMC meetings. Powell wants to say just enough to warn the market of potential upcoming policy changes, without putting himself into a policy-box. The fed doesn’t want to lock itself into any long term decisions, preferring instead to be “nimble in ability to respond to changes in inflation or the labor market”, as Powell put it in his speech from earlier in the day.

The moment that shook the market

On the topic of reducing the balance sheet, Powell said,

So what is Powell saying here? The possibility is on the table. He’s letting the market know that there are some extra tools to in play in case rate hikes do not do the job of curbing inflation. Simultaneously, in non-specific FOMC-fashion, he’s not putting any sort of timeline or offering many additional details about pacing.

Though, he did indicate that the Fed would primarily be reducing it’s position in mortgage-backed securities in favor of owning US treasury bonds. Reflective of this, the US 10-Year Treasury Note saw a sharp rise around the time of Powell’s speech. 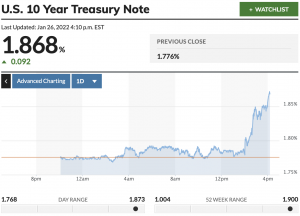 So, what do we do from here?

Is it time to go cash for 7 years like this guy?

Is it time to start searching through the rubble to buy the dip in your favorite tickers?

We can’t answer those questions, and anyone who claims they can is guessing at best. After all, at Market Rebellion, we aren’t bearish or bullish: we just stay disciplined and search for opportunities to exploit the market in both directions.

What we can say for sure is that with so much volatility, and so much intraday movement, it’s a great time to be an options trader. If you’re interested in learning how to utilize options strategies that can prevail in any market condition, we highly recommend taking a look at the many professionally guided services we offer.