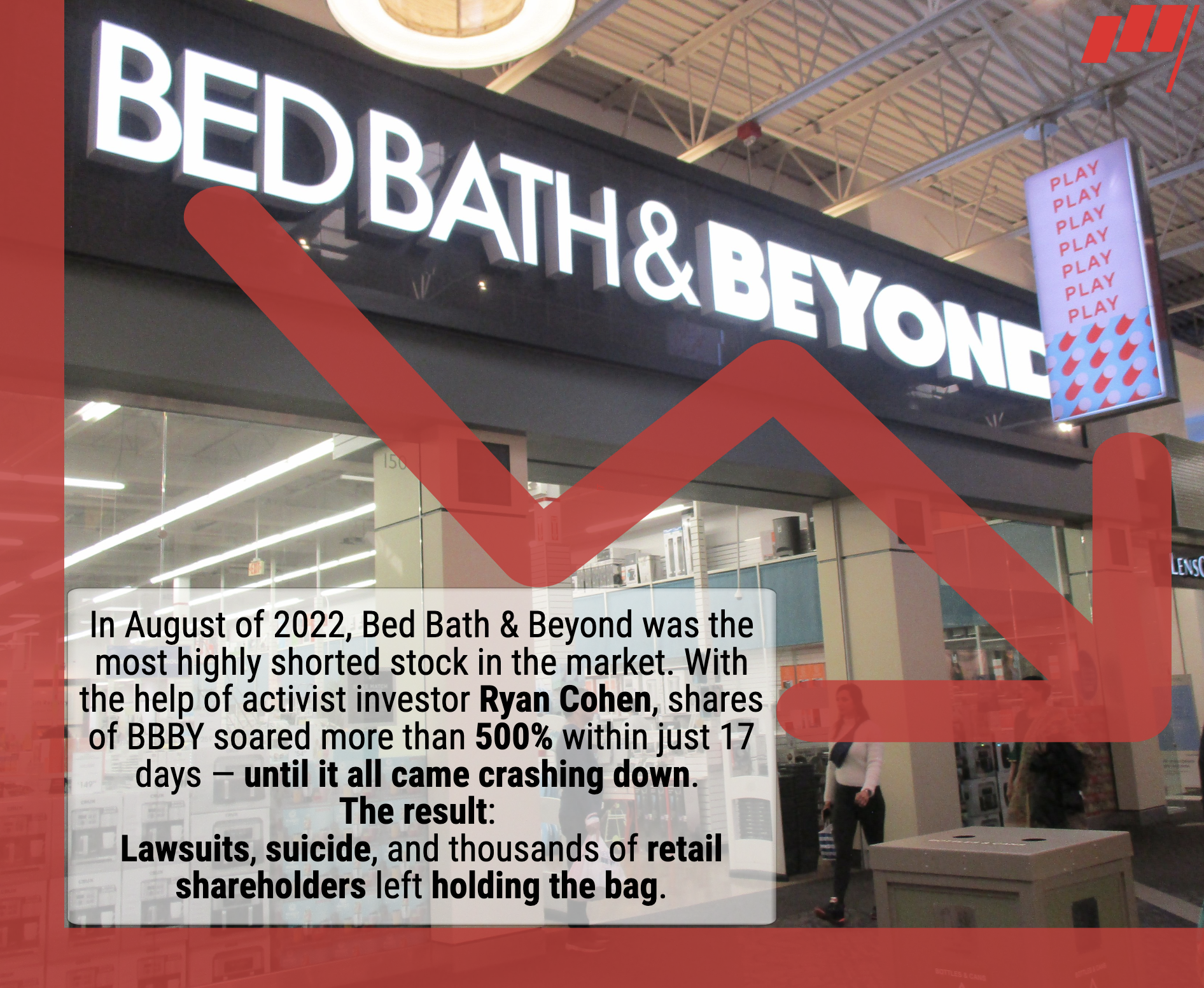 The insider trading investigation and death of Bed Bath & Beyond’s CFO are just the latest in a slew of bearish news for the company. Just days ago, Bed Bath and Beyond announced it would be laying off 20% of its staff and shutting doors on 150 of its stores. Possibly worse than mass layoffs for the future of Bed Bath & Beyond shares is the fact that it recently lost the support of its largest advocate — Chewy founder and Gamestop chairman, Ryan Cohen.

Ryan Cohen was largely credited with Bed Bath & Beyond’s recent rally. After taking a massive position in BBBY, Cohen had been a very vocal advocate for the struggling retailer. That position included over 16,700 far out-of-the-money January call options with strikes ranging from $60 to $80 dollars — with a stock that was trading in the single digits. Following his investment, Cohen began to publicly comment on BBBY, at one point exchanging barbs with CNBC. 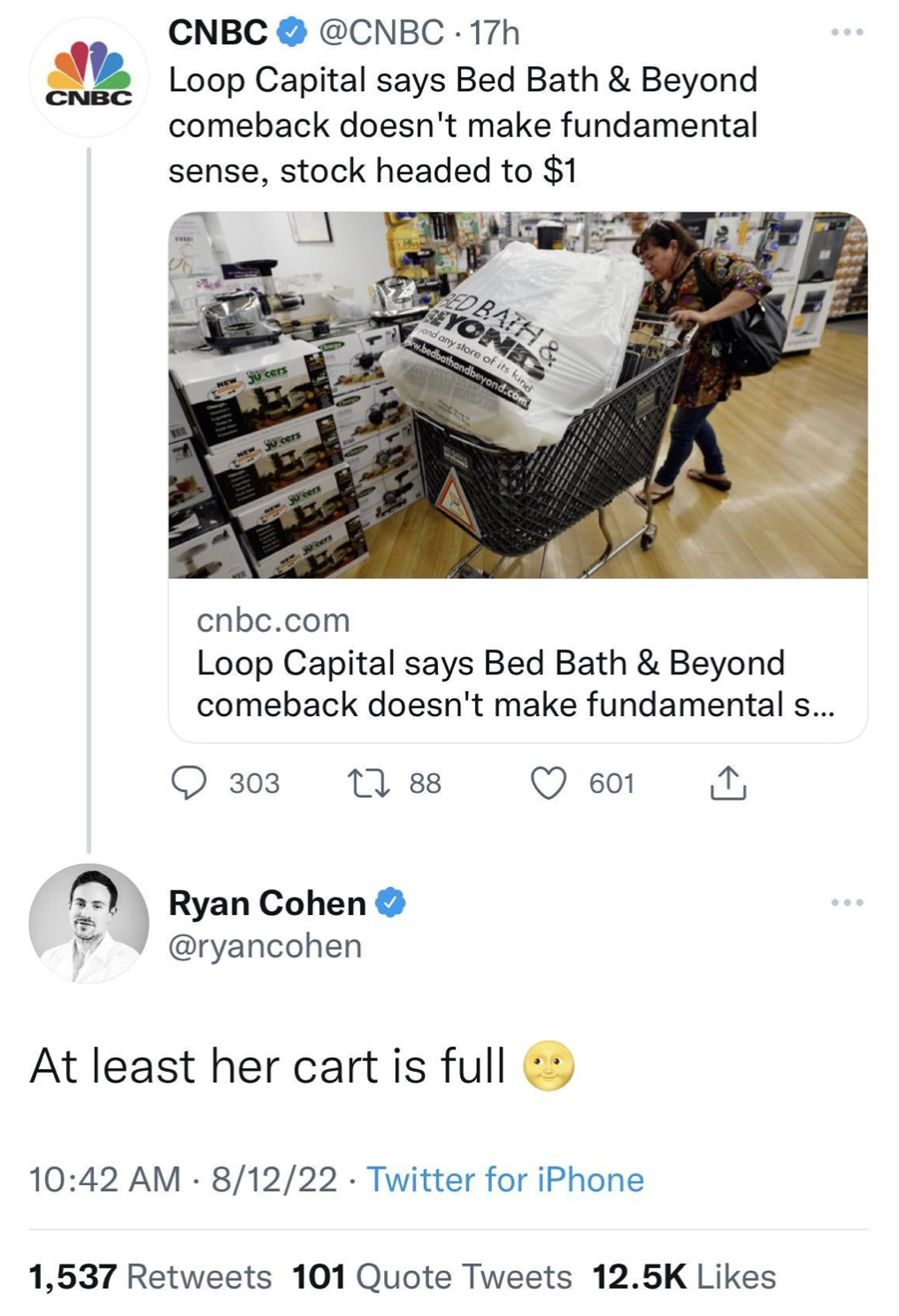 That moon emoji posted in the early days of BBBY’s rally was seen as a hidden message from Cohen, who previously used emojis to rally his base of GME supporters. Source: Twitter, @ryancohen

Cohen frequently tweeted about what should be done to help the retailer improve. Among his suggestions were a spinoff of Buy Buy Baby, and key leadership changes. On the day that CEO Mark Tritton was ousted, Cohen tweeted,

YOU EITHER DIE A HERO, OR YOU LIVE LONG ENOUGH TO SEE YOURSELF BECOME THE VILLAIN pic.twitter.com/Y4WB61esxh

Less than one week after tweeting a moon emoji at CNBC, Cohen would file a Form 144 indicating his intent to sell his position. It took less than 48 hours for Cohen to complete the sale of his entire BBBY position, including more than 16,700 call options and more than 7.7 million shares sold at the peak of the rally, raking in a $68 million dollar profit. Some of his shares were sold for as much as $29.21 dollars — just $0.85 cents away from BBBY’s 52-week high.

Upon news of the sale, BBBY began to plummet, falling more than 70% below its August high within just 13 trading days. The Insider Trading Lawsuit Against Ryan Cohen and Gustavo Arnal

One investor who didn’t get “trapped” was CFO Gustavo Arnal, who sold more than a million dollars worth of BBBY shares at an average cost basis of $24.22 (SEC filings show that Arnal sold the largest swath of shares at $29.95, just $0.11 cents away from BBBY’s 52-week high) on the same day that Ryan Cohen began selling his shares, moments before Cohen’s Form 144 declaring intent to sell became a widely circulated document. This curious sale is part of what drew legal attention to Arnal, leading to the insider trading lawsuit, and unfortunately, Arnal’s untimely death.

In the suit, the plaintiff (investor Pengcheng Si) states that Cohen and Arnal “provided materially false statements” to investors and “took advantage of the inflated stock price fraudulent SEC filings to sell shares and options at artificially inflated prices to unsuspecting and innocent public investors, control of the profits.”

According to the suit, Cohen allegedly approached Gustavo Arnal in March of 2022 regarding a mutually beneficial plan to coordinate the sale of their respective shares.

Sick of Wall Street insiders getting the last laugh? Take back the power. Discover how we uncover the massive option trades that they want to keep secret — and how we use them to our advantage.

How to Spot Possible Insider Trades When They Happen

We won’t know for sure the result of the lawsuit against Ryan Cohen and Gustavo Arnal until the case resolves. However, historically, investors who get caught insider trading have often received light punishments — and there is no “mandatory minimum” penalty for the crime, meaning that punishment is at the discretion of the judge. Additionally, the market is such a big place, with many millions of securities being traded back and forth each day, making catching activity like this particularly difficult for the SEC. The result: Unfortunately, insider trading is alive and well on Wall Street.

Market Rebellion sees suspected insider trades on a regular basis through monitoring unusual options activity in the stock market. Insiders often use option purchases hidden under the surface of the market to make targeted predictions on stock price movements ahead of major news breaks. Let’s look at two examples of massive option purchases that seemed to prognosticate market-moving news that occurred within just the past two weeks.

Puts Bought on Semiconductors One Week Before New Regulations

On August 26th, Market Rebellion identified 23,400 out-of-the-money put options bought in AMD and NVIDIA, minutes apart. Four days later, the buyer came in and yet again spent millions of dollars on 15,000 additional put options on AMD expiring on 9/02. The day after that buyer’s last purchase, the bearish news hit the tape: New U.S. regulations would no longer allow NVIDIA and AMD to sell high-tech semiconductors to China. The stocks plummeted, sending NVDA to its 52-week low, and the value of those options sky high.

On August 19th, Market Rebellion identified 30,700 out-of-the-money call options bought in Occidental Petroleum (OXY) expiring just one week from the purchase date. Following the purchase of these options, the news broke: Legendary investor Warren Buffett would be allowed to purchase up to 50% of existing OXY shares — far more than the 17% of shares he currently owns. Occidental Petroleum is the top-performing stock in the S&P 500, up more than 121% year-to-date. That’s a lot, but it can’t hold a candle to the percentage-gain that the holder of these calls experienced within just hours of their purchase.

Capitalizing on the Insider Trading that Everyone Else Misses

Ryan Cohen’s alleged insider trading in Bed Bath & Beyond was big news, in part because of the stock’s popularity on the options trading subreddit Wall Street Bets. 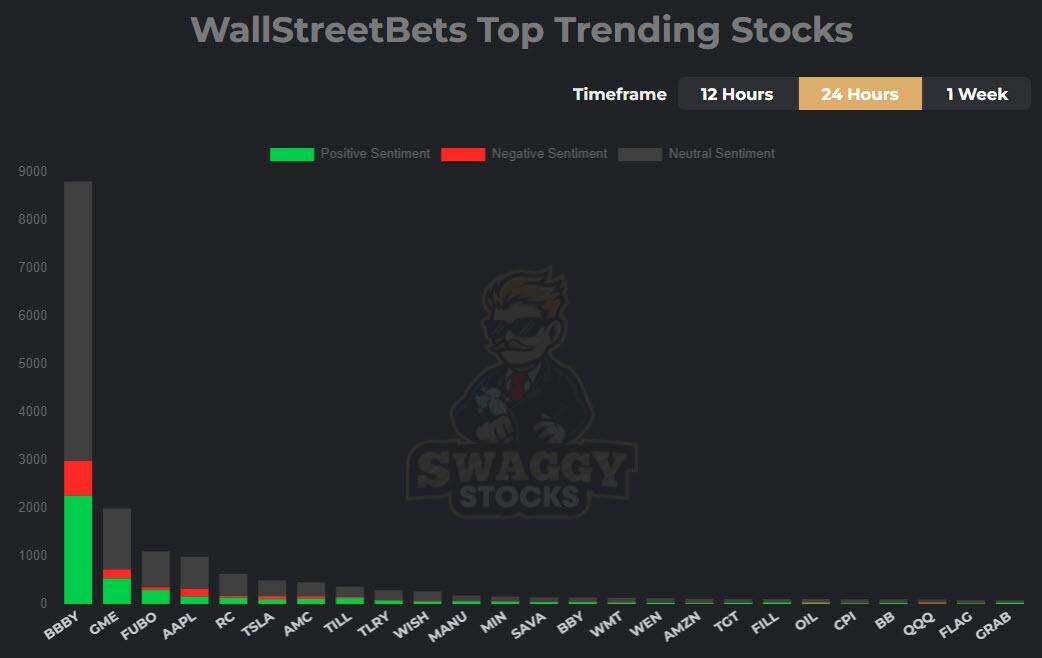 A 24-hour sentiment chart from Wall Street Bets during the BBBY rally. More mentions for BBBY than the other 24 results combined. Source: Swaggy Stocks

However, you likely didn’t even hear about the massive, multi-million dollar option purchases made in NVDA, AMD, and OXY in the past two weeks despite how colossal and conspicuously timed the trades were. At least, you didn’t hear about those trades…

Unless you’re a Market Rebel. We published both of those trades in real-time for our subscribers. Our professional option order flow analysts sift through all (yes, all) of the option trades made every single day searching for the most unusual activity on the options chain. When that activity hits the tape, our analysts publish the trades instantly for all Market Rebels to see. Unfortunately, the option trades shown above have come and gone. However, the “smart money” never sleeps — new unusual option activity trades are made every single day.

Curious what the hedge funds, institutions, and “smart money” traders are positioning into next? Ask Jon & Pete Najarian yourself — at RebelCon 2022! It’s less than three weeks away, so don’t miss your opportunity to lock in a virtual spot before it’s gone!