How to Trade Earnings with Straddles (Featuring Netflix and Tesla)

How to Trade Earnings with Straddles (Featuring Netflix and Tesla)

Here’s a way to play earnings by comparing the historic average earnings move of a stock to the current implied move. We’ll use two stocks that are reporting earnings this week as examples — Netflix and Tesla.

How to Calculate Implied Move

The implied move is shorthand for the amount that a stock is predicted to move up or down (often calculated as a percentage) by the expiration date of the option contract. You can calculate this by adding the premium from the at-the-money call and put (a straddle) and dividing that figure by the share price.

To turn that straddle price into a percentage-based implied move, you would use the calculation:

Now, how do we utilize this information?

After doing a little bit of research, we know that the average one-day earnings move in Netflix over the past 4 quarters is 15.6% — roughly 1% higher than the current implied move of 14.59%.

Those previous moves were:

Verdict: On a historic basis, the current Netflix straddle is underpriced.

Ready to start trading? Try Unusual Option Activity Essential. Learn how you can follow the “smart money” with a fresh UOA trade idea each week – including technical levels so that you know where to enter and exit.

To make this information actionable, you have to make a judgment call. Ask yourself, “is this market environment calm enough to justify Netflix’s reduced volatility?”

Put another way, do you think that Netflix’s earnings move will be average this quarter? If so, you may want to consider going long the straddle, with the knowledge that history (at least, on a one-year and YTD basis) is on your side.

Nothing in options trading is guaranteed — but by collecting and analyzing all of the data available, we can give ourselves a statistical edge.

Let’s examine one more notable stock that’s reporting earnings this week: Tesla! We’ll use the same method to determine how the current implied move stacks up against the average earnings move.

For our second example, we’re looking at one of the poster children for high-beta growth stocks: TSLA. But with earnings set to drop on the Wednesday following Netflix, how does the original EV meme stock’s implied move stack up to the streaming giant?

With an implied move nearly half that of Netflix, it might sound like a pre-earnings Tesla (TSLA) straddle is a steal! But once you take a look at Tesla’s average earnings move, you might be surprised.

The average one-day earnings move in Tesla over the past 4 quarters is just 5.0% — 2.84% lower (more than 50% lower on a comparative-percentage basis) than Tesla’s current implied move of 7.84%.

Those previous moves were:

The average YTD move of 7.39% bridges the gap slightly, but it’s still roughly half a percent less than Tesla’s current implied move of 7.84%.

Verdict: On a historic basis, the current Tesla straddle is overpriced.

Yet again, to convert this data from information into action, you have to make a judgment, asking yourself the same question as before: “is this market environment calm enough to justify Netflix’s reduced volatility?” In other words, do you think Tesla’s earnings move this quarter will be average? If so, you might not want to go long on a straddle in this name.

In fact, if you feel really strongly about Tesla not being able to satisfy the earnings move priced into its option premium, you might consider using a strategy like a short iron condor or a calendar spread to sell some of that premium.

As we stated above, nothing in the market, (or in options trading, or in life) is guaranteed — but by studying the past, we can give ourselves clues about the future. And if Tesla’s past is to be believed, the options ahead of earnings may be overpriced.

The Bottom Line: Trading Netflix or Tesla into Earnings

Market Rebellion Co-Founder Jon Najarian often refers to options trades expiring in less than a week as “deep-end of the pool” trading. That doesn’t mean you have to hold your breath while you’re holding these options (although at times you may want to).

It means these maneuvers are for experienced traders who are comfortable with high risk-reward trades. And if you’re trading options expiring in less than a week through earnings, you’d better buckle up: because that’s even riskier.

Because on top of the high theta-decay associated with short-term options, you’re battling with high implied volatility which will get “crushed” after earnings. “IV crush” is the options trading term associated with a rapid decrease in IV following an event like earnings.

In other words, if you hold a short-term option through earnings, and it’s out-of-the-money following the event, you’re probably going to have a bad time — or at the very least, a bad option.

On the other hand, when it works — it can really work. The massive moves associated with earnings can sometimes lead to the sort of incredible returns that option traders dream about. 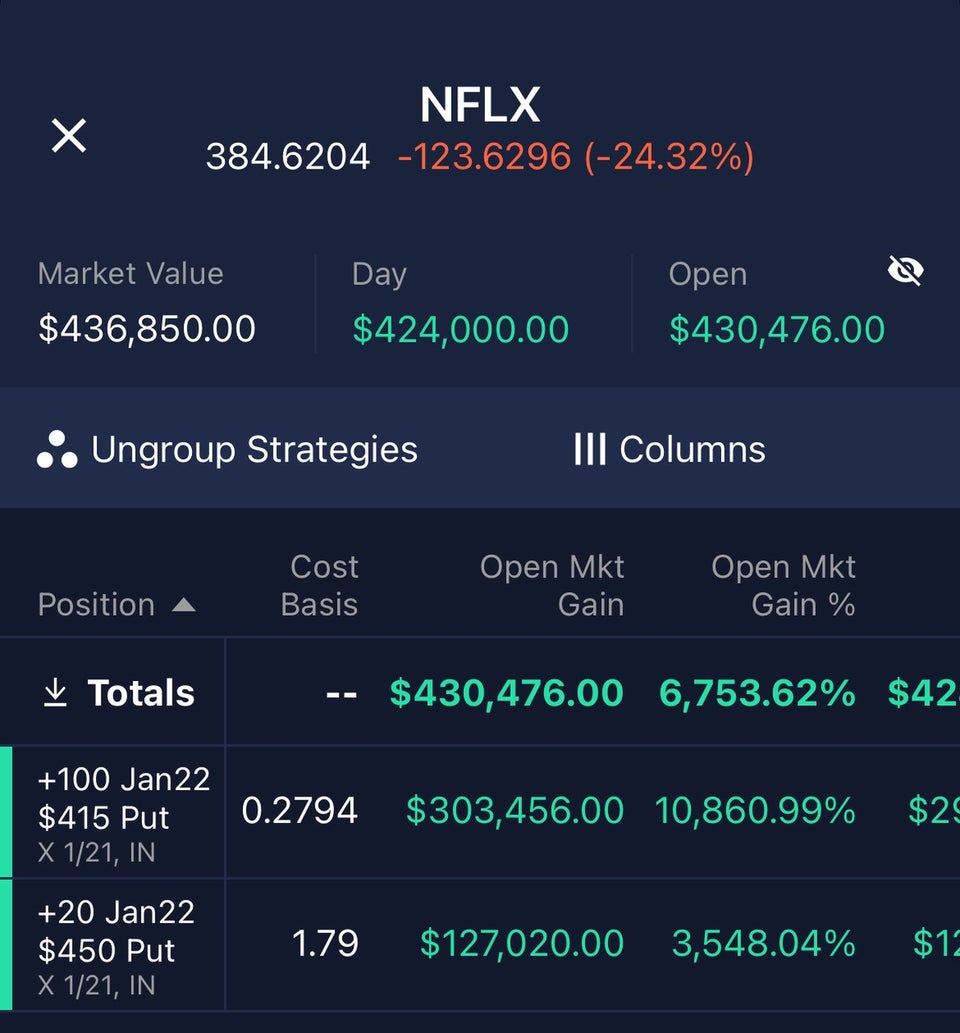 It’s important to note that holding long OTM options through a known volatility event like earnings is generally NOT SMART, for all the reasons mentioned above. Just let this example serve as a reminder of how powerful these moves can be — and also, why it’s so important to stay vigilant if you’re trading earnings.

In short: It’s okay to make an educated, measured trade on earnings. Just do your homework, be aware of the risks, and don’t bet the house.