How to Trade Relative Strength

How to Trade Relative Strength

Discover how to trade relative strength with these two powerful stock market indicators. 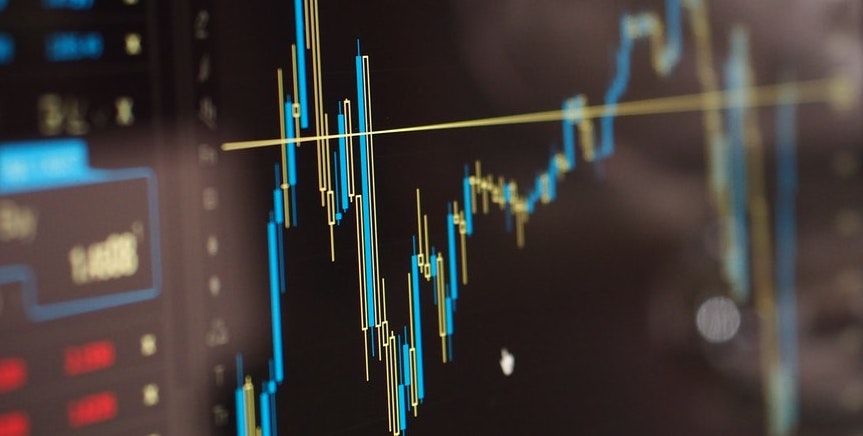 If you’re unfamiliar with stock indicators, RSI, or the relative strength index, is a great place to start. A popular momentum indicator, RSI uses an oscillator to delegate stocks with a value between 0 and 100.

Oscillator: A line graph that moves up and down between two extremes (in this case, between 0 and 100)

Momentum Indicator: Technical indicators like RSI, relative strength, MACD, and Stochastic Oscillators are all methods of analyzing the strength, speed, and size of a stock’s move.

Traders use RSI to determine whether an equity is overbought or oversold in a particular time frame. As the price of the asset rises and falls, so does the RSI — which is commonly read like this:

As you continue to study RSI, you will likely come to your own conclusions and develop your own nuances about this popular indicator. But the 30/70 rule is a great place to start.

For instance, if you’re a day trader (intending to get in and out within the same day, buying and selling tiny bounces or pullbacks in an equity), you should be working most closely with the one-day RSI.

If you’re a swing trader and plan to be in the trade for weeks or even months, you might consider using a broader month time frame.

How It Works In Practice

Let’s use the Apple ($AAPL) 1-month RSI as an example of how you could have used overbought and oversold signals to trade bounces and pullbacks in this name. 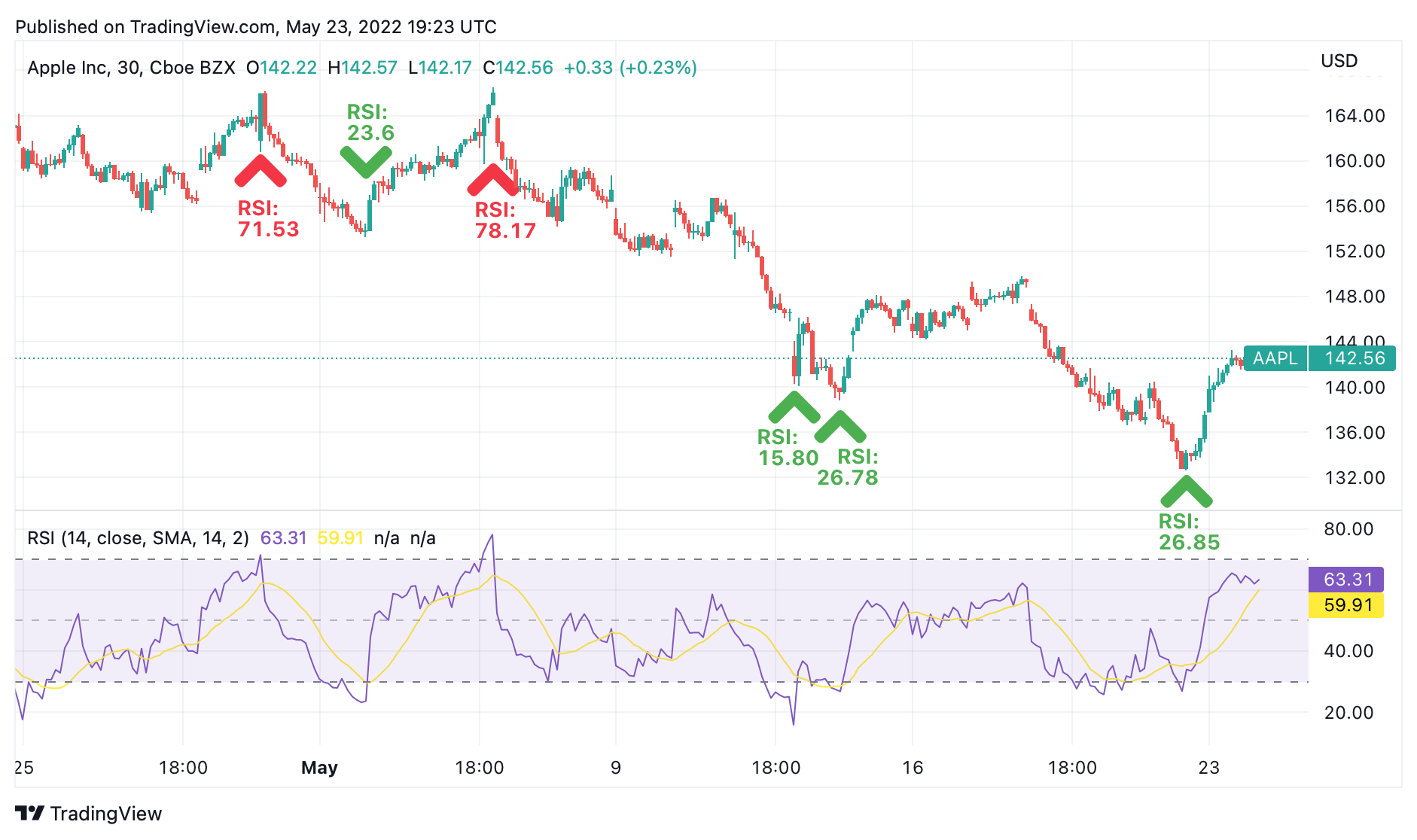 As you can see in the chart above, RSI doesn’t always work out this perfectly. On May 12th, Apple’s RSI reached 15.80, the stock bounced quickly, and then fell back to an oversold reading once again on the same day. While Apple did recover about 10 points after that reading, it only reached an RSI of 62.23 (not technically oversold) before taking its next leg down.

What does this tell us? That RSI is one important tool for any trader to get a bigger picture about the price action in a particular asset — but it isn’t the only tool to do this.

We know, it sounds confusing, but technically relative strength refers to a different measurement than the RSI.

While RSI allows traders to measure potentially overbought or oversold conditions in an equity, relative strength measures an equity’s performance compared to its peers.

For instance, if a stock is outperforming its sector (or a close competitor, or the market in general), it is considered to have high relative strength.

Here’s an example of a few ways you might measure YTD relative strength in Apple ($AAPL): 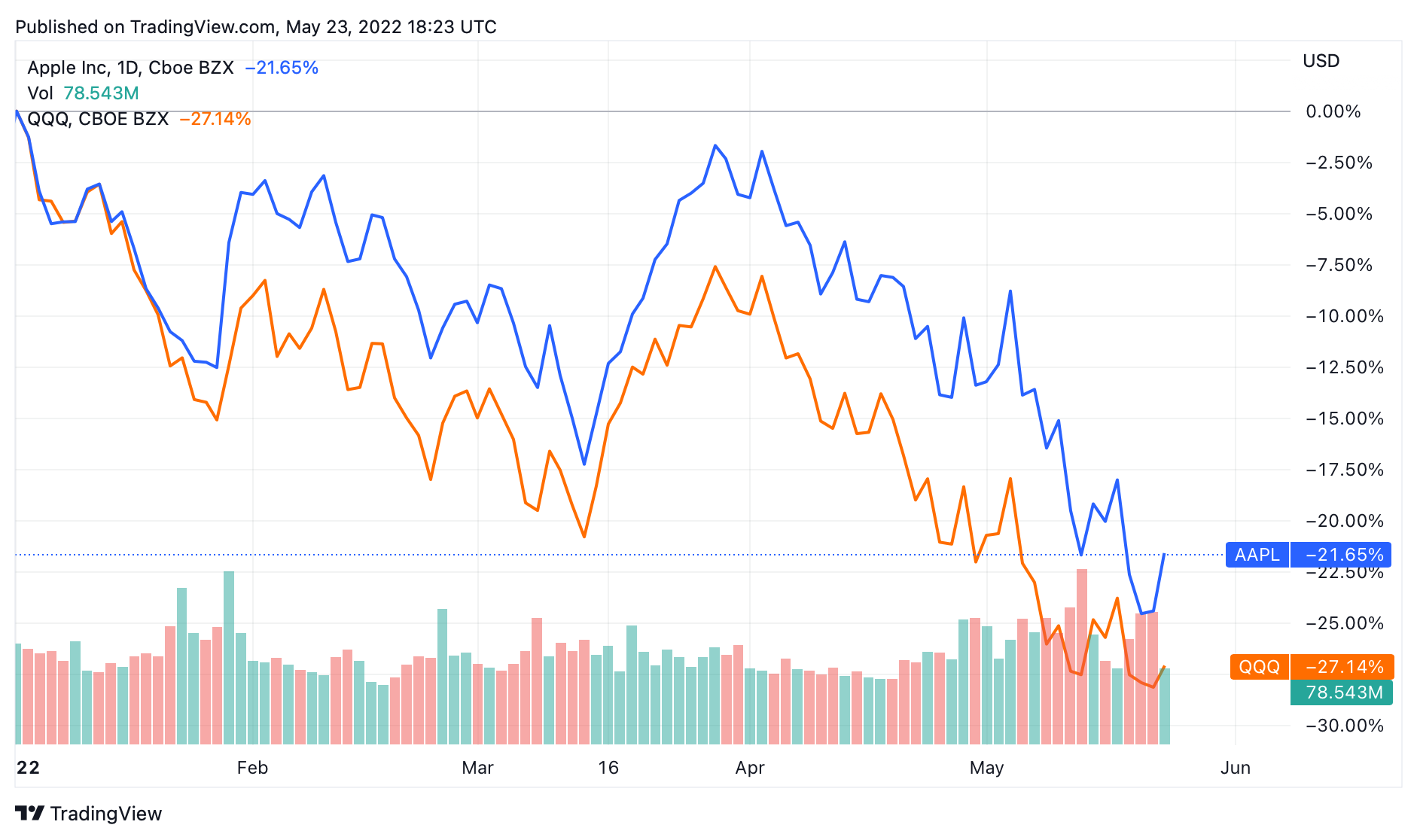 In this example, Apple has more relative strength than the popular tech ETF, $QQQ (which is 11.02% Apple stock).

Apple Versus the FAANG Complex, YTD 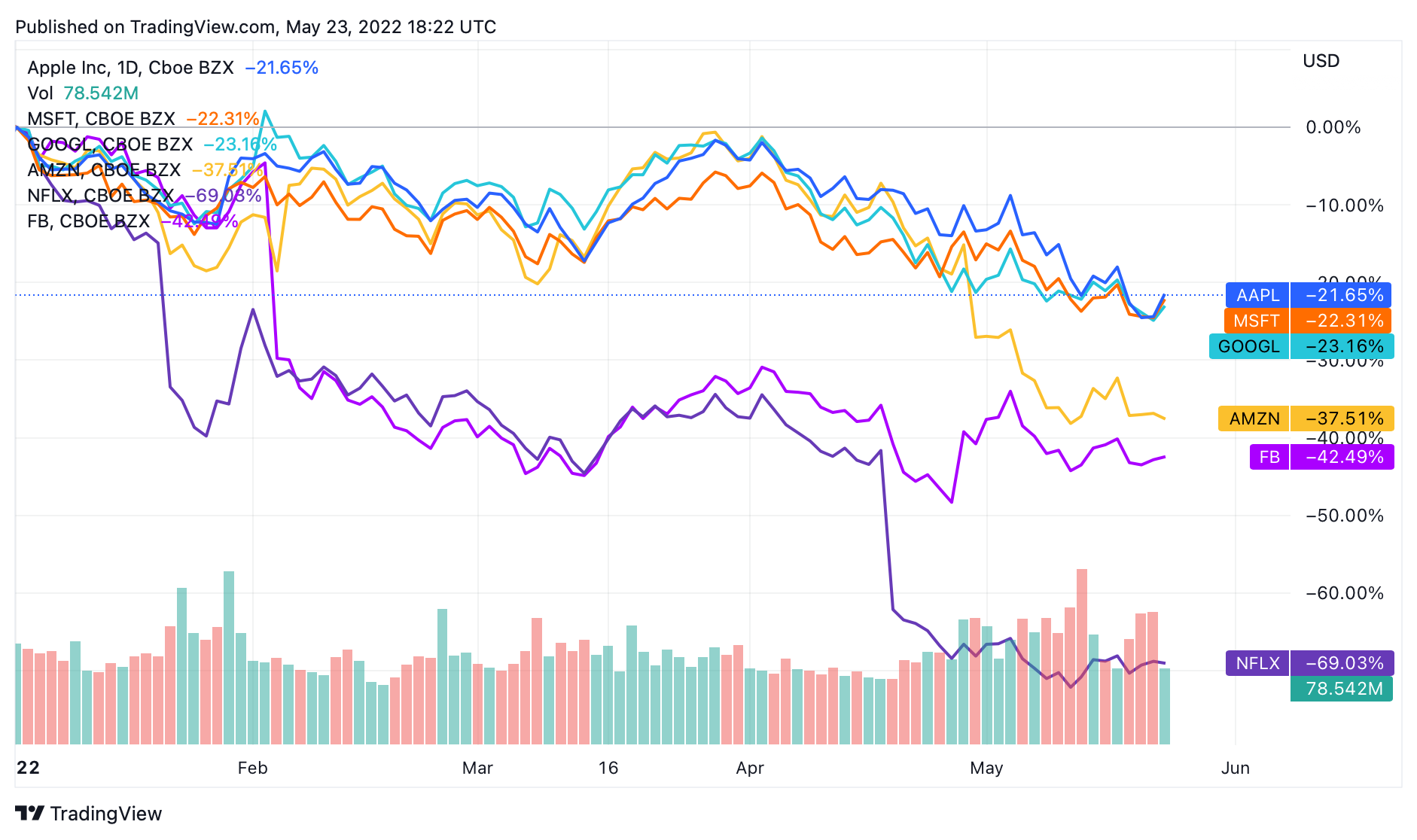 While many of the companies in FAANG are not direct competitors to Apple’s business model, the stocks are often placed in the same “genre”. For that reason, it can be helpful to know which of these big tech behemoths have the highest relative strength. In this case, it is Apple that comes out on top, with Netflix taking the bottom spot. 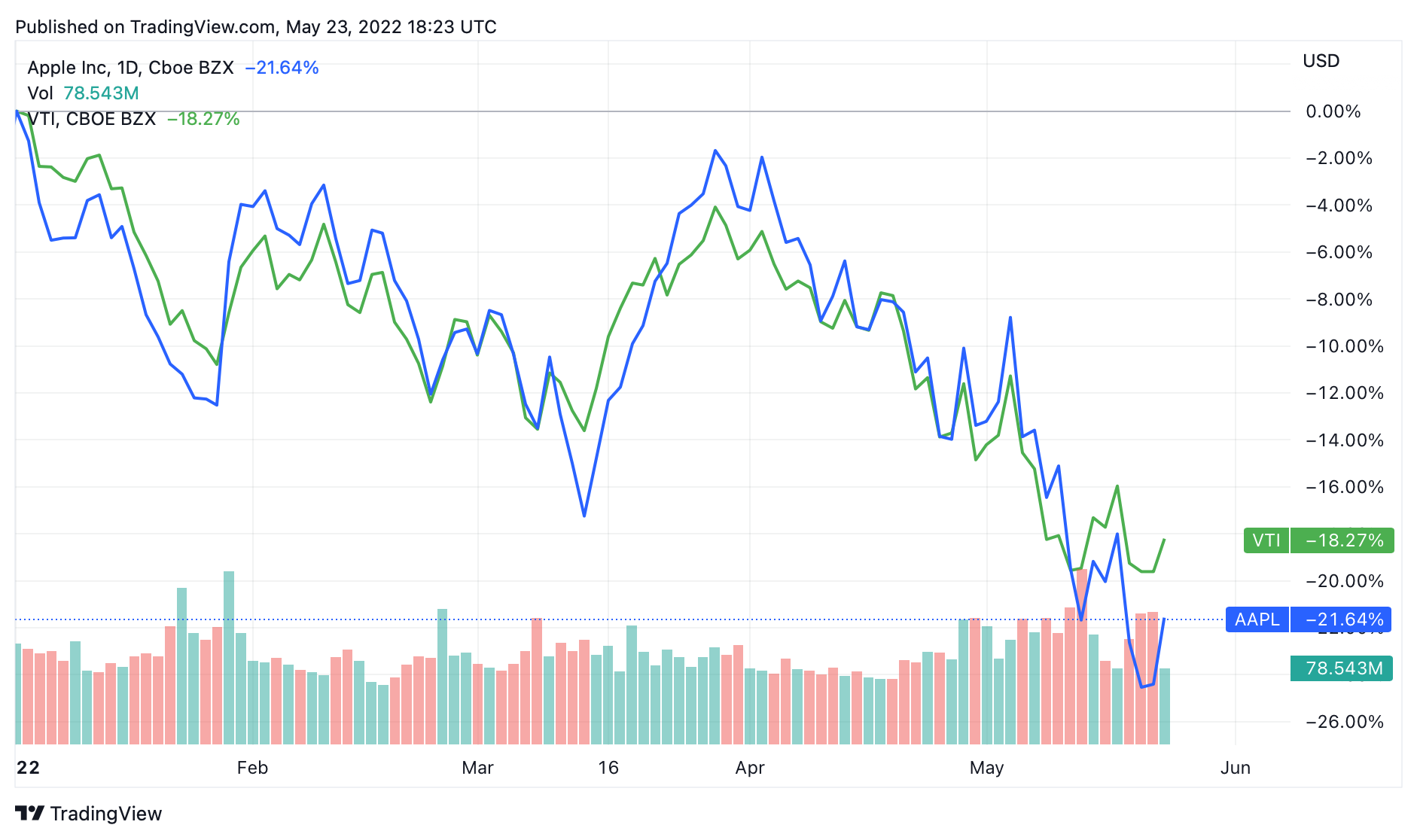 In this example, we see that year-to-date, Apple has underperformed the $VTI ETF (which seeks to be a measure of all stocks), meaning it has a low relative strength when compared to the broader market.

Of course, if you zoom out to a one-year view rather than a year-to-date view, the story changes once again.

Apple Versus $VTI and $QQQ, 1YR 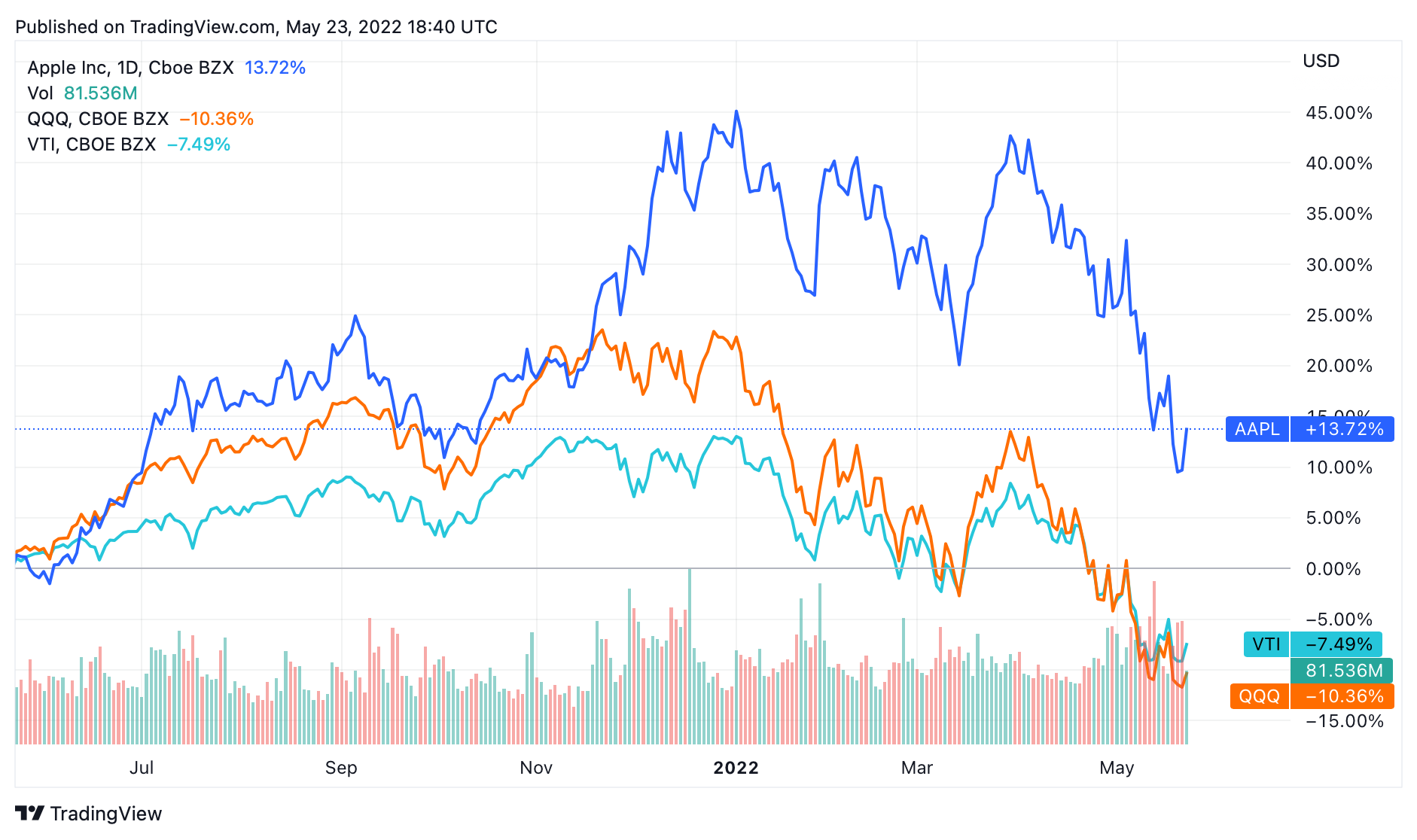 So after reading this, you may have some questions. Questions like, “why so many charts?”, “why so many different ways to measure relative strength?”, and “which measure is most effective?”

The answer to all three: More data makes you a better-equipped trader. By combining these indicators, and absorbing all of the charts & time frames, you can get a much better picture of the performance of an asset.

For instance, in the example above, if you just looked at Apple YTD, you would see a stock that was down 21.64%. By examining its tech peers and the market as a whole, you get a broader picture — it isn’t an Apple problem, it’s a macro problem.

And then, by zooming out and viewing it from a different time frame, you illuminate the picture even more: it isn’t common for Apple to underperform like it did YTD.

Finally, by viewing the RSI through multiple time frames, you can start to determine a suitable entry point — if you were planning to make a trade, that is.

Is all this technical analysis going over your head? We know, it can be difficult to understand. That’s why it’s so helpful to have a professional analyst in your corner. In our flagship service, Unusual Option Activity Essential, that’s exactly what you get. Weekly trade ideas from a Chartered Market Technician based on technical analysis and “smart money” moves. Click here to try UOA Essential for $29.