How to Trade the Moving Average: EMA vs SMA, Golden Cross vs Death Cross

How to Trade the Moving Average: EMA vs SMA, Golden Cross vs Death Cross

Exponential moving average (EMA) and simple moving average (SMA) are two common technical indicators that hold a lot of data about where assets have been and where they might be going.

EMA and SMA track the average closing price of a security over a set period of days. This is similar to the VWAP, or volume weighted price average, which tracks the average price that shares of a stock have traded at over the course of a single day.

Whether you’re looking at VWAP, EMA, or SMA, you can use these indicators to determine the average trade price of a security over a preset period of time.

Popular time horizons for exponential and simple moving averages are 50 days, 100 days, and 200 days. It’s worth noting that moving averages are lagging indicators. The larger the time period, the stronger the “lag”. That’s why many traders working on a shorter-term basis prefer using 10 and 20 day moving averages, which respond quicker to changes in market sentiment.

How to Trade the Moving Averages

During healthy technical trends (trends that move in an orderly fashion, in a single direction), assets often lean on important moving averages as areas of support and resistance. For example, during a bullish period between November 2020 and September 2021, SPY (the SPDR S&P 500 ETF) generally “respected” its 50-day moving average — never remaining below the 50 DMA for more than a single day. Each return to the moving average provided SPY with a buyable bounce…

That is, until the trend started to break down. In October, SPY spent several days below the 50 DMA, representing weakening strength in the long-running bull market. Though SPY managed to retake the moving average for a brief period, by January of 2022 it broke below the 50 DMA once more, which would signal a multi-month top for the ETF.

Recently, the SPY ETF broke back above the 50 DMA. Investors and traders will be watching closely to see if this is a false breakout, like the one in late March, or a sign that market sentiment is shifting back to bullish. They’ll want to see the SPY ETF “respect” the 50 DMA as support.

Discover more option trading tips inside The Rebel Hub. Get free access to Jon Najarian’s “3 @ 3”, “60 Seconds with Jon” and Pete Najarian’s “The Take” — all free, uploaded every day.

What is a Golden Cross? What is a Death Cross?

The golden cross and the death cross are both well-known technical patterns that are intended to predict a change in trend.

On the other hand, the death cross is the opposite: a bearish pattern that occurs when a short-term moving average crosses below a long-term moving average.  Examples of both are shown below in Teladoc Health (TDOC) using the 50 DMA (blue) and the 200 DMA (orange). 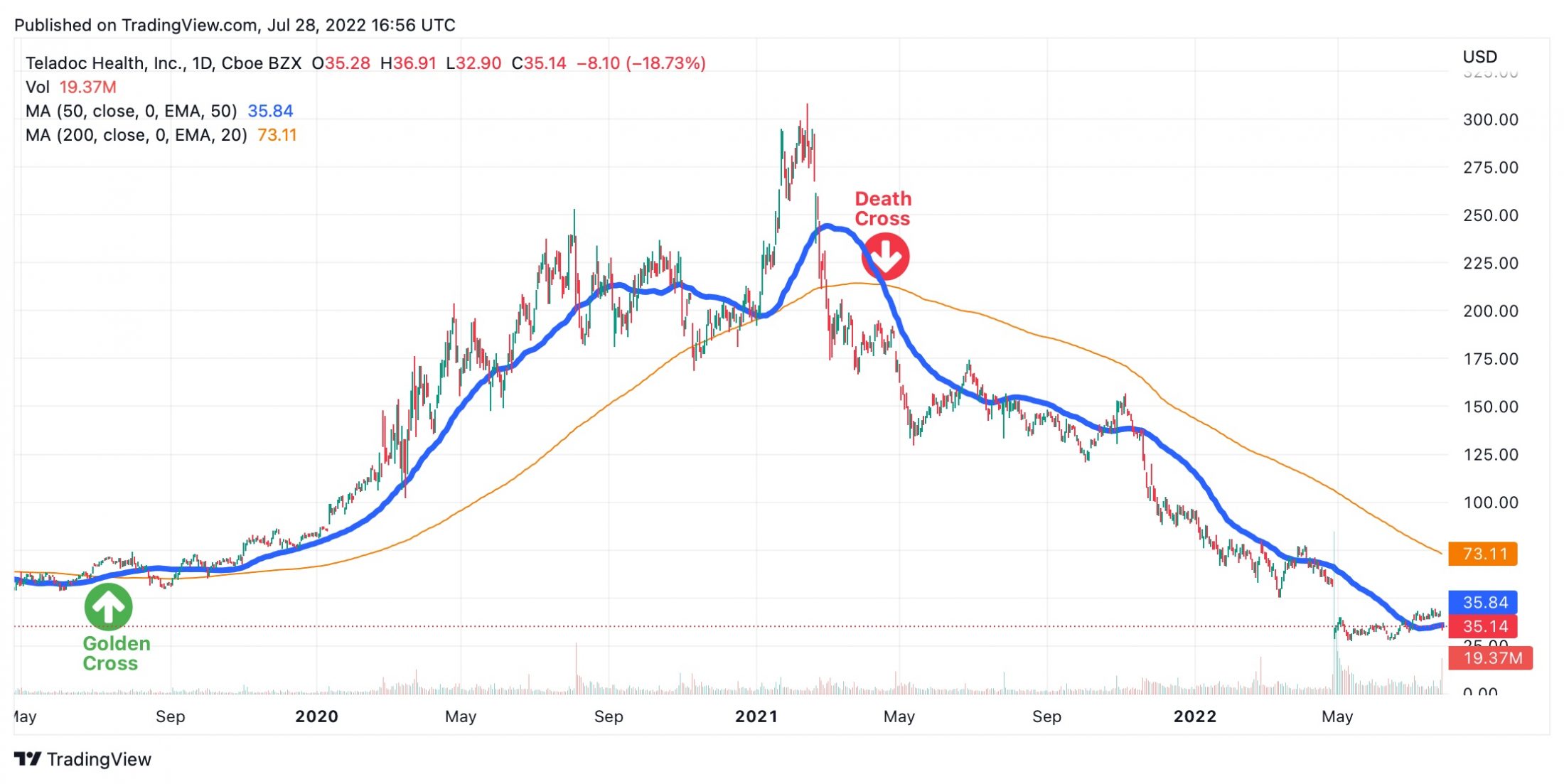 Between the point where the golden cross begins and the death cross takes over, shares of Teladoc rise 153% (and much more if measured from peak to trough).

Conversely, once the death cross is confirmed, Teladoc falls more than 80% in just over a year. 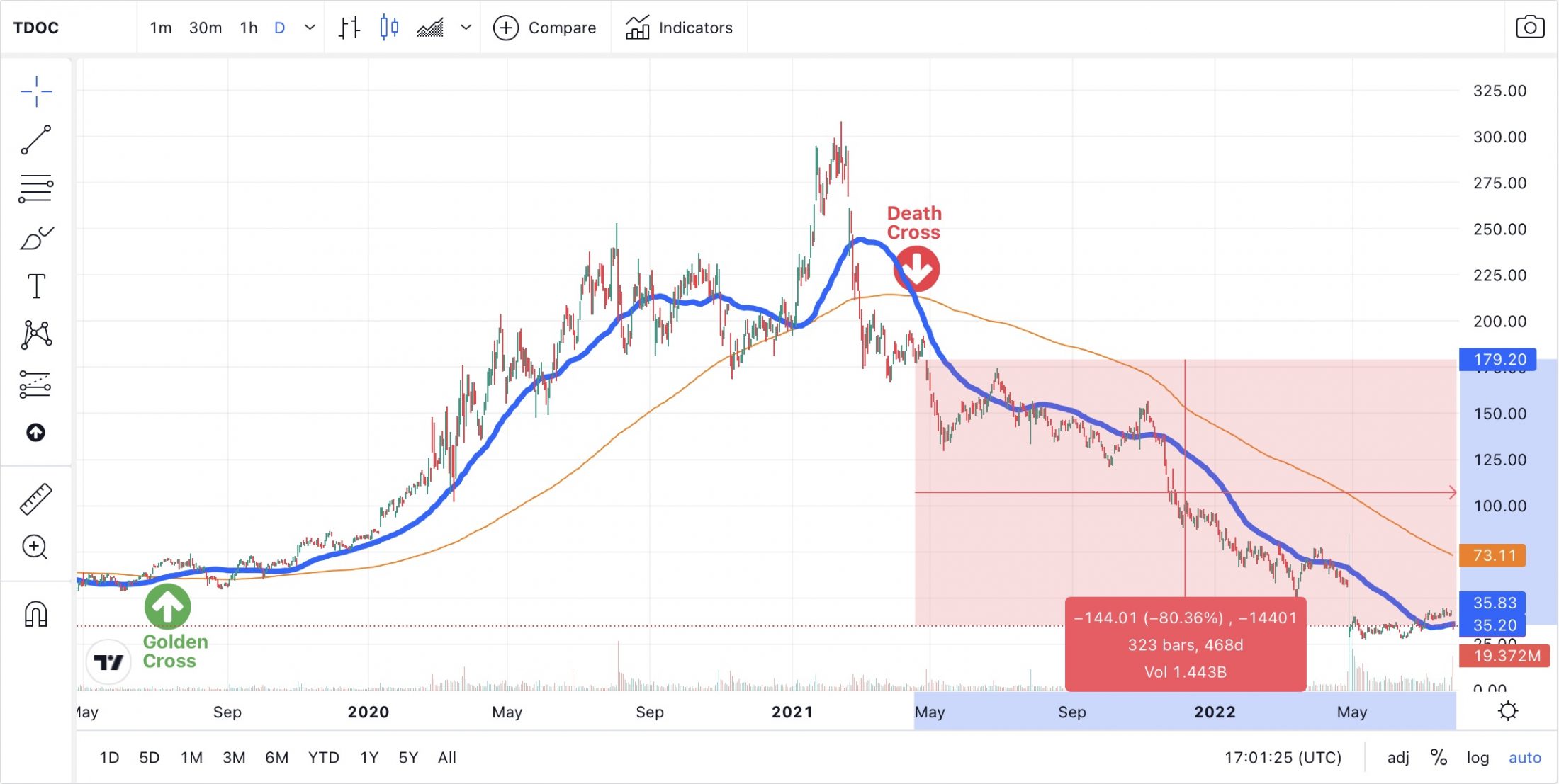 As with any technical pattern, these aren’t fool proof. But there are plenty of investors with plenty of cash who pay close attention to these indicators. Sometimes their trades and investments can turn technical patterns like this into a self-fulfilling prophecy, making these patterns worth understanding — whether you’re a believer in technical analysis or not.