optionsoptions tradingMarket Rebellionmarketsstockstradingtechnical analysisgap fill
You've probably heard that gaps in the chart fill 80% of the time. But do you know why that is? Here's CMT AJ Monte's no-nonsense explanation. Scroll down for real-life examples, and current UNFILLED gaps in one high-valuation name.

A $100 stock reports subpar earnings — almost immediately, shares fall 10% in after hours trading. The stock doesn’t recover by the open of the next day. Instead, they open at $90: they gapped down. This happens all the time, and a common theme in charting is the idea that stocks have a propensity for filling these gaps. In this case, filling the gap would be the stock trading back up from $90 through $100 during regular market hours.

So one more time: what is a gap? A gap is a difference in price between two periods of time, where trading did not occur between the two prices. If that sounds complicated, let Market Rebellion’s lead CMT AJ Monte explain it.

Let’s look at a few examples of what a 1D chart gap looks like in real-life.

Here are a few examples of some recent gap-ups and gap-downs in Apple AAPL.

This chart (which uses daily candles during regular hours) makes the gaps pretty obvious. If we were looking at a chart over the same time period that used a line rather than candlesticks, it wouldn’t be so obvious. Candlestick charts offer more data at a glance, and if you aren’t used to using them, it’s never a bad time to start. But that’s a topic for another day!

Notice that these gaps are annotated beginning at the wick or shadow of the candle, and not the close or open — because the shadow indicates a period where trading occurred, it’s important to include them in the calculation of both where the gap is, and where the gap is filled.

Using the same Apple chart from above, let’s annotate where those gaps were filled. 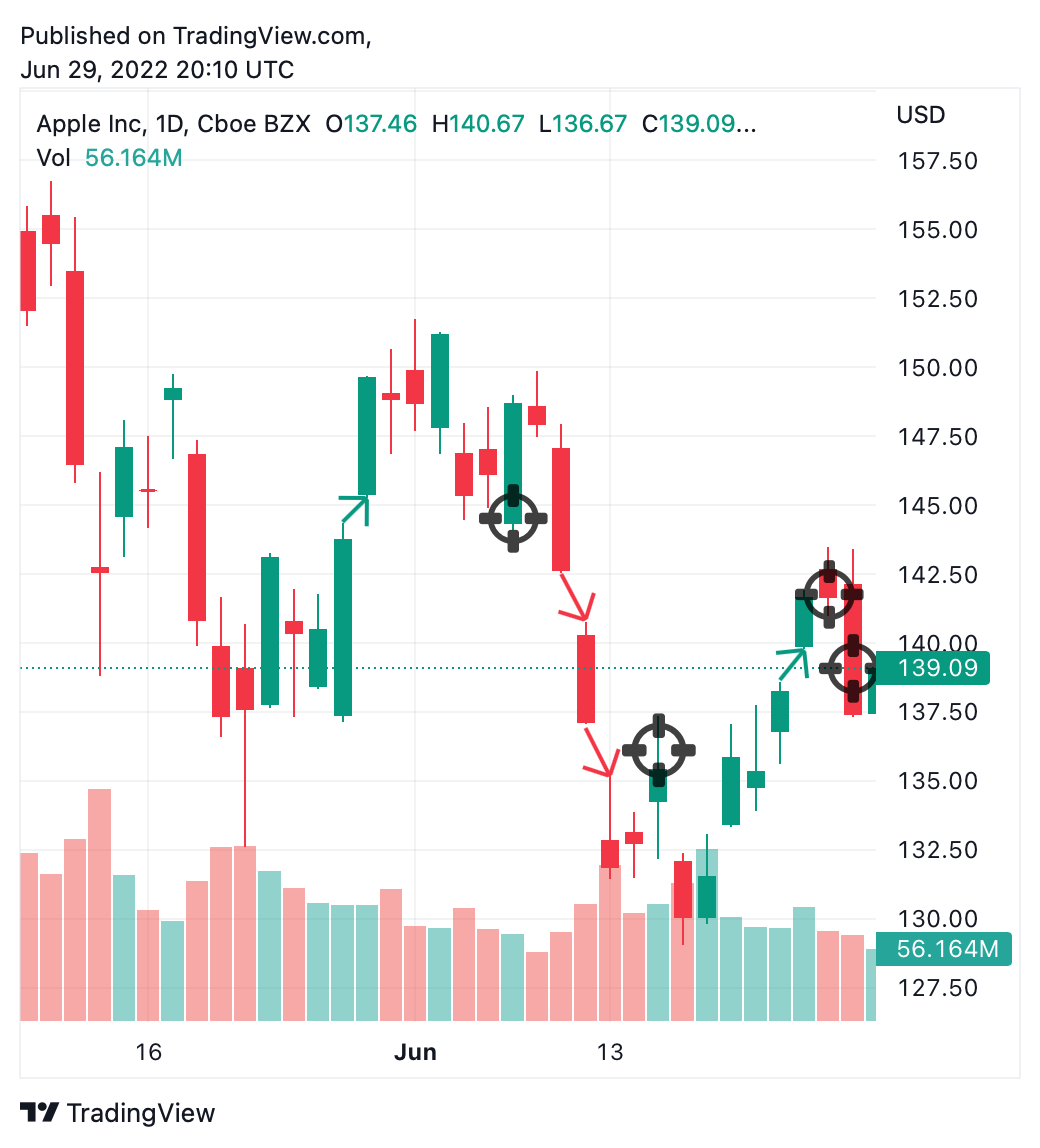 Yes. And furthermore, there’s nothing that says gaps in a chart must be filled immediately. Sometimes they can take years to fill. However, like AJ said above, it’s worth noting that roughly 8 out of 10 gaps get filled eventually. Rather than thinking of this trading method as a hard and fast rule, you should think of gaps in a chart like magnets. They can be resisted, but they provide an added “pull” to a stock’s price action. Not to mention, with the large number of traders watching for the completion of these patterns, it can become somewhat of a self-fulfilling prophecy (like many themes in technical analysis). Regardless of why these gaps often get filled, it’s worth adding this simple charting concept to your trading arsenal.

If you’re interested in trading a gap fills with the help of a licensed Chartered Market Technician, check out AJ’s Options.

Curious about real-life gaps that exist unfilled in a name that’s been plummeting ever since the CEO made a controversial acquisition?