Netflix Earnings Alert: After four consecutive quarterly reports that led to red days (the last two of which averaged more than -28%) the streaming giant has finally done it: we’re green (at least for now). 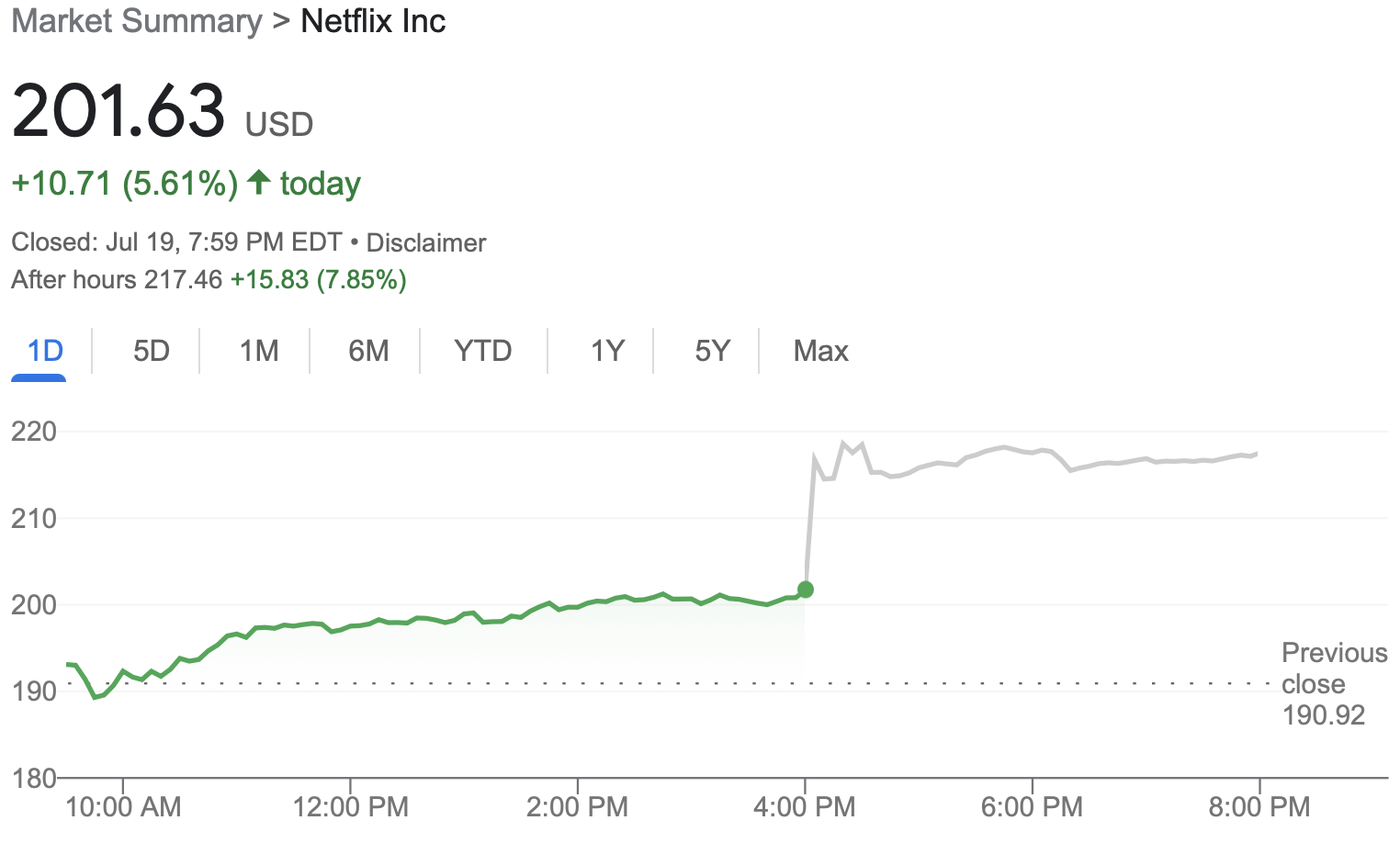 But what caused the bullish move?

Was it a big beat from the Netflix earnings report? Nope! The earnings were pretty lackluster — a revenue miss coupled with an EPS beat (as shown above).

Okay, but what about Netflix’s guidance?! Sorry, it wasn’t that either — the company expects to add roughly 1 million net new subscribers for the third quarter, lower than the estimated 1.8 million.

So what was it? Often, the thing that moves the needle isn’t the report itself, but the commentary. And this is the area where Netflix came to play.

The company said it plans to roll out a cheaper ad-friendly tier in early 2023 — and they’ve partnered with Microsoft to help. Why Microsoft? This isn’t their first time in a partnership like this. Years ago, Microsoft partnered with Facebook to help their ad business become the powerful revenue driver it is today. Though cheaper, the ad-supported tier won’t include all of Netflix’s content.

Additionally, Netflix will continue to roll out its “paid sharing” plan — an effort that is currently in the early stages of release, which will seek to upcharge “password sharers”. Specifically, people who are sharing an account with someone who lives outside of their home. The broader version of this rollout will take place in 2023.

Regardless of their future plans, the highly bullish reaction to Netflix’s objectively bad earnings report is a relatively bullish sign for the market. As Jim Lebenthal of CNBC’s Halftime Report has said many times, when the market starts to react positively to negative news — that’s a sign that bearish sentiment is leaving the market.

Would it really be a Market Rebellion article if we weren’t drawing attention to the shady institutional option traders who seemingly saw this move coming?

Just two weeks ago, with Netflix trading at $181.62, an institutional trader got bullish on Netflix. This whale rolled down 5,500 $205 strike call options to the $200 strike — a bold move for three reasons:

The breakeven on these options was $208.05 — meaning anything above this is all profit. That doesn’t account for the three days of remaining extrinsic value left in the option.

Though much of the extrinsic value will be quickly depleted at open due to the effects of IV crush, it’s likely that the big move in this name will keep traders interested enough to keep these options active.

If Netflix opens as high as it closed, these $200 strike calls expiring Friday will be worth more than twice the 4.4M that this millionaire trader paid for them. That’s why we follow the smart money.

Missed out on this Unusual Option Activity banger? It’s okay — there’s plenty more where that came from. Get started trading UOA today.