Rolling an option is one of the most effective ways to secure profit on a position while reducing risk and maintaining exposure to the trade.

POP QUIZ: You’re in a trade, it’s going well. In fact, it’s going so well that the contract value has doubled since you originally took the position. What do you do?

If you ask Jon Najarian, you cut the position in half immediately.

Jon Najarian’s Risk Management Rule-Of-Thumb: Take the Double, or Walk at Half

Securing profit is one of the most powerful ways to ensure your long-term market success. Forget YOLO’ing into positions and HODL’ing for >1000% gains — that’s never going to be consistent. And without firm rules about when to take profits, you’re just rolling the dice. By adopting a plan before making a trade, and sticking to it, you can be a disciplined trader. And as Jon and Pete always say, discipline dictates action.

In the clip above, Jon’s giving a basic rundown of when he likes to secure profits; when a position gets cut in half, he’s out. When a position doubles, he takes half off the table. That’s one way to do it, but there’s actually an even better way. A strategy that Jon and Pete use constantly: rolling an option.

The Specific Type of Roll We Use to Lock-In Profit: Rolling Up

If you’re unfamiliar with what a roll is, check out this free article which explains it in-depth: Rolling 101. For the sake of time, we’ll give a cursory explanation here as well:

Rolling: Closing a contract(s) and simultaneously opening a new contract in the same security.

Rolling up: Closing a contract(s) and simultaneously opening a new contract in the same security at a farther-from-the-money strike price.

Rolling out: Closing a contract(s) and simultaneously opening a new contract in the same security at a later expiration date.

Rolling in: Closing a contract(s) and simultaneously opening a new contract in the same security at a nearer-term expiration date.

Rolling down: Closing a contract(s) and simultaneously opening a new contract in the same security nearer-to-the-money strike price.

In Jon’s example, the type of roll we would be using to mitigate options risk is almost always the roll up — a rolling strategy that allows a trader to maintain exposure to the trade while simultaneously taking profit off the table.

Let’s look at an example of how the options roll up works in a real-life trade.

Let’s look at a scenario using a real option chain to see how you could use Jon Najarian’s risk management rule-of-thumb to help you roll up a live trade. 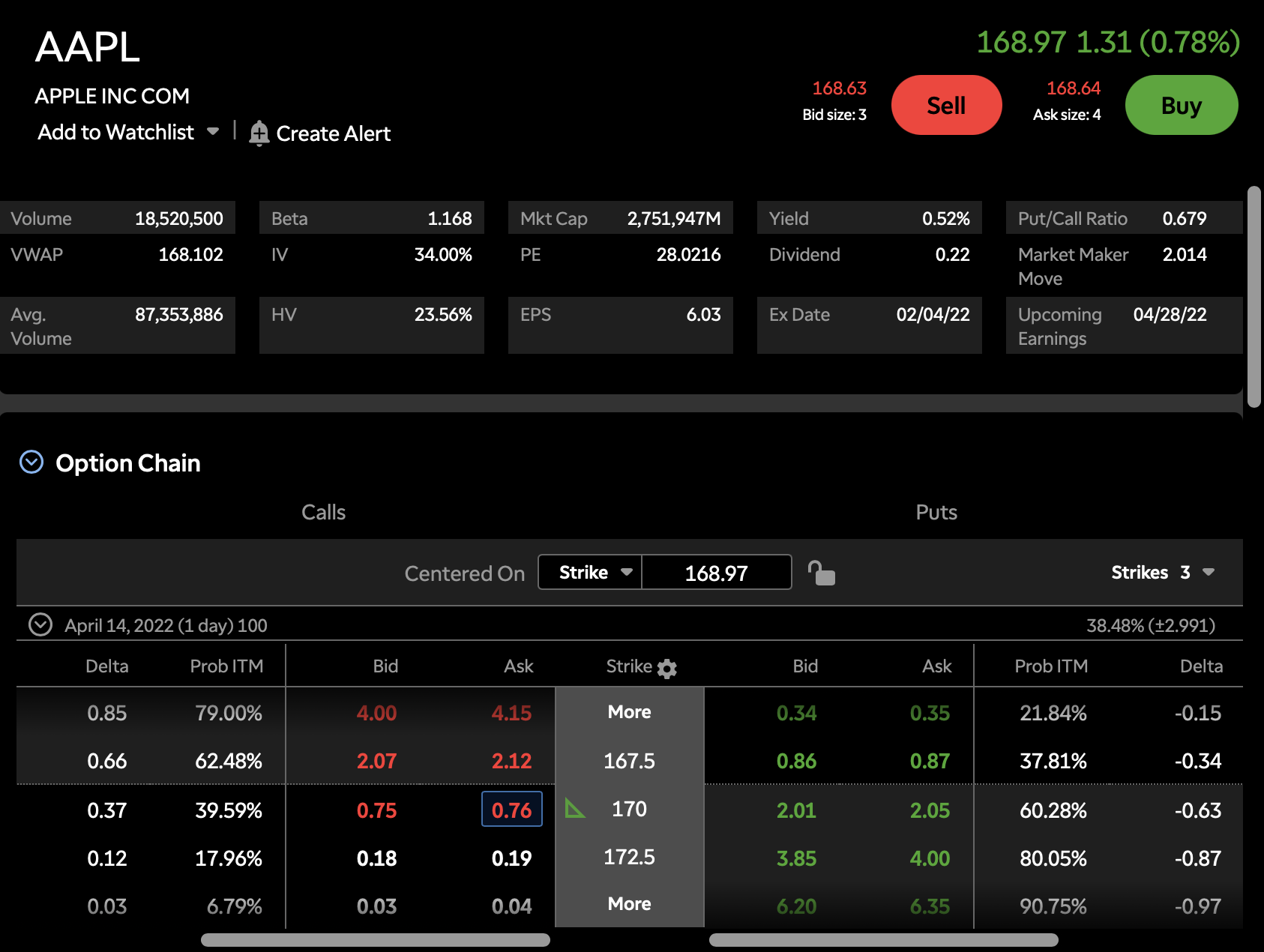 Within a few hours, shares of Apple rise, and along with it, the value of your option. Your $170 strike call is now worth $1.71, more than double the original cost! 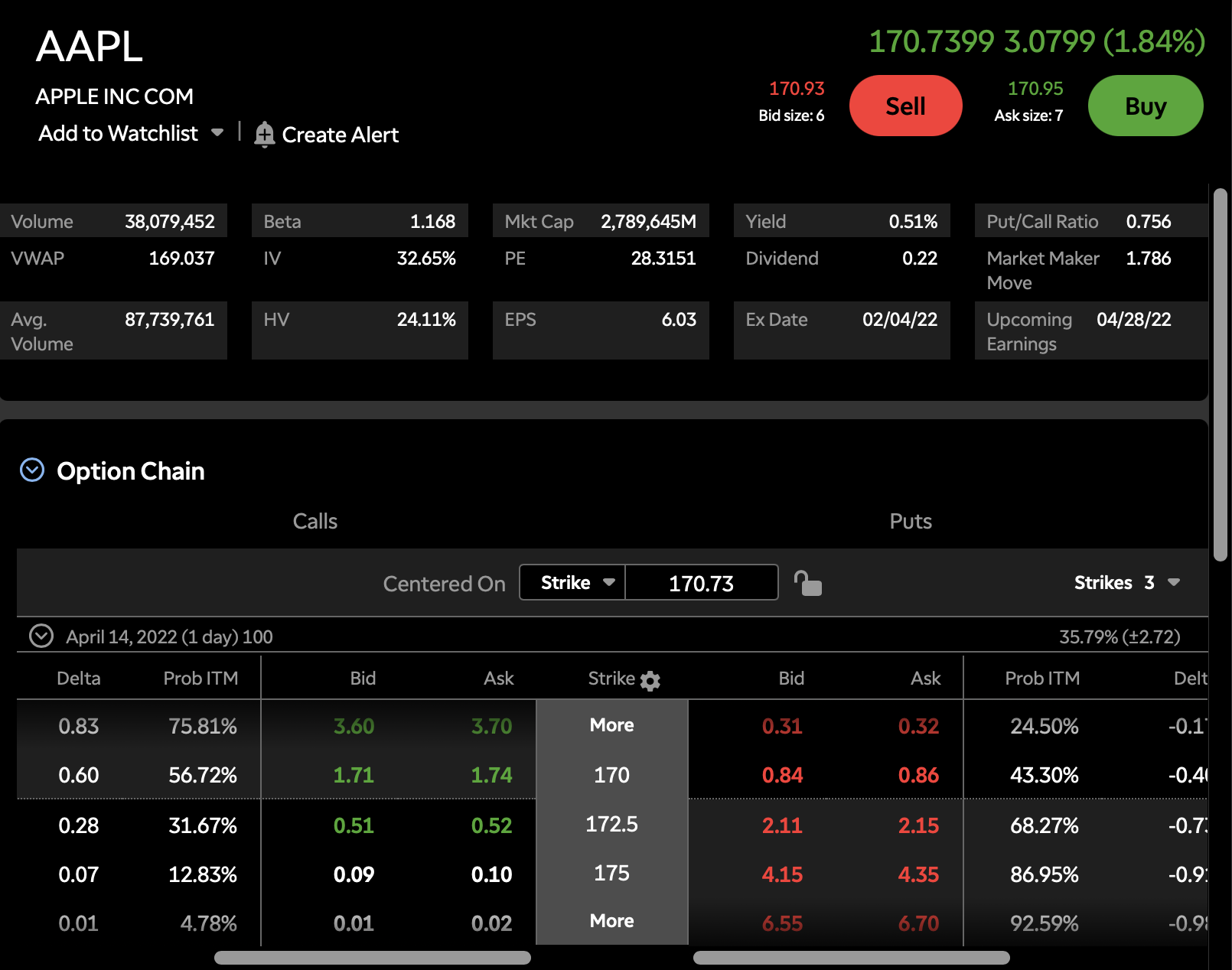 You decide to follow Jon’s advice from the clip above. You want to take some profit, but not all! So you roll the option up and out, giving you more time to be correct and allowing you to take 50% of the profit off the table immediately. To do that, you scout ahead to the next expiration, on the hunt for something that costs roughly half of what your option is worth.

In this case, you find the $175 strike call expiring April 22nd trading at $0.84. You take the deal — giving yourself 8 additional days and an $0.87 credit. You can repeat this process as many times as you like, following the momentum and scraping profit off the top every time you score a double!

When the momentum slows and the value of your option falls to 50% of what you paid, you can rest easy. You’ll know that you’ve already profited several times over, and were only risking “house money” by this point in the trade. When that happens, you can follow Jon’s advice, and exit the trade, utilizing that remaining capital on the next high-flier.

Another frequently used risk management tactic by professional options traders including Jon Najarian is spreading the trade. This strategy is not a type of roll, but it is a way to maintain exposure to the trade while still taking some profit off the table — like rolling.

If, in the example above, you sought to spread the trade rather than roll it, you would look to sell another option at a further from the money strike against the preexisting option that you already own. This would turn your single long call into a long call debit spread, capping your potential gains.

In a debit spread, your maximum trade value is capped at the difference between the two strikes. So for instance, if we look at the moment when we were profitable in the example above, where we owned the $170 strike 1DTE Apple call, we would likely sell the $172.50 against it for a credit of $0.51:

This would allow us to take $51 dollars off the table. Now, our new amount of capital at risk would be roughly $1.20, and the maximum amount that we could gain by the expiration would be another $1.30 if shares of Apple closed the following day at or above $172.50.

Spreading a trade is great when the extrinsic value of further from the money options is high. In this case, rolling was ultimately the better strategy, because it gave us the ability to uncap our risk, gain 8 days of tradeability, and still allowed us to take even more profit off the table than the spread did.

However, every situation is different. There will be many situations where a spread will be the right move, for instance, when implied volatility is running high.

That’s why options are so powerful — because there are so many options for how to use them.

Rolling With the Punches

Now you know how to roll or spread an option, Najarian style. Isn’t it easy? Knowing how to manage risk and having specific rules about when to do so can help save you from the trap of “being too greedy”, or holding too long.

Risk management leaves plenty of room for nuance. While Jon’s clip from above recommends taking profit at 100%, you can adjust that percentage to whatever you see fit. Maybe you’re trading a slow-mover, or you just like to collect profit more frequently — you might decide that 50% profit is plenty for you!

Regardless of what your specific plan is, the important thing is that you have a plan, and that it’s clear before you enter a trade. Want us to build the trade plan for you?