Chargepoint is Surging — Did the Smart Money See it Coming?

Chargepoint is Surging — Did the Smart Money See it Coming?

While the broader market has churned sideways, bullish investors in EV infrastructure company Chargepoint have had a phenomenal two weeks.

Between May 23rd and June 8th, shares of Chargepoint have run from $10.31 to as high as $16.15. That’s more than 56% in just 13 trading days — and institutional investors have come along for the ride… in the form of colossal option purchases spotted by Market Rebellion.

What Is Unusual Option Activity?

You can think of Unusual Option Activity as the breadcrumbs left behind by the “smart money” — hedge funds and institutional traders. By utilizing teams of researchers, sophisticated algorithms, and immense warchests, the “smart money” has an uncanny ability to stay one step ahead of the market… an ability that they leverage through the power of options.

The trades they make remain hidden under the surface of the market, buried beneath a sea of option order flow — unless you know what to look for. Things like:

When all three of the above conditions are true at once, it’s worth paying attention. But when multiple, repeated trades like these pop up over and over again in the same underlying stock, that’s unusual option activity.

Chargepoint Drives Higher — “Smart Money” Goes Along For The Ride

Over the past 13 trading days, 12 king-sized option purchases have been made in Chargepoint. Starting with a $1.68 million dollar trade on May 23rd with the stock trading at just $10.67, and repeating again and again, sometimes more than once in a single day. 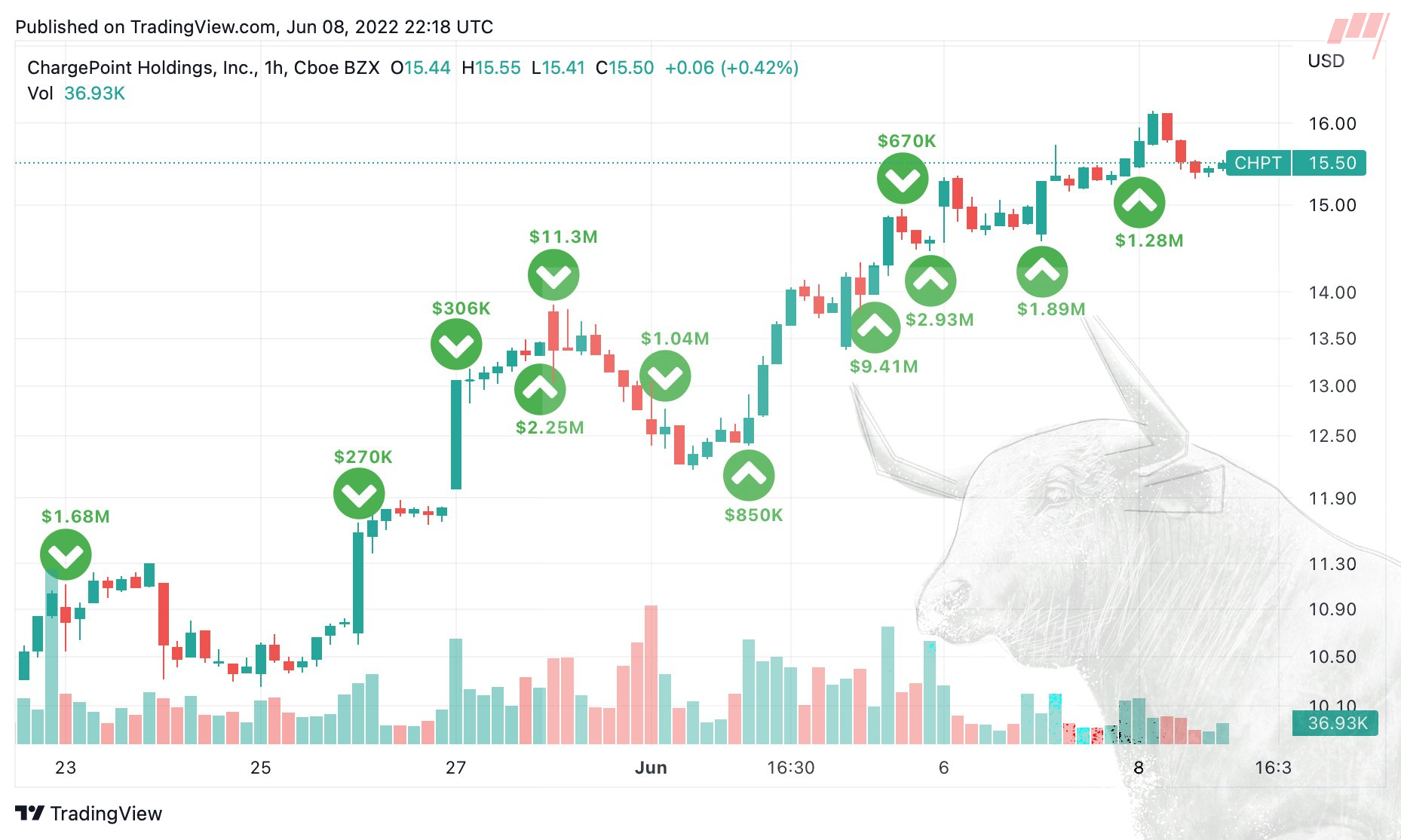 Each green arrow denotes a bullish option trade, annotated with the total dollar amount risked by the trader.

This institutional trader (or traders) risked a total of more than $33.8 million dollars on these 12 bullish option trades. The most recent one was made just yesterday on June 8th for $1.28 million dollars.

What Caused The Surge in Chargepoint?

It’s unclear exactly why Chargepoint ripped so hard to the upside. It may have something to do with gas prices reaching record highs — but could that really be the whole story?

Was it their earnings report? Unlikely. During the period in reference Chargepoint reported a revenue beat and an EPS miss. Clearly the EPS miss didn’t stop the stock from soaring, but the report was far from stellar.

Comparatively, Target ($TGT) had a similar earnings result around the same time period — a revenue beat and an EPS miss. Target fell -24.84% in a single day to a new 52 week low. 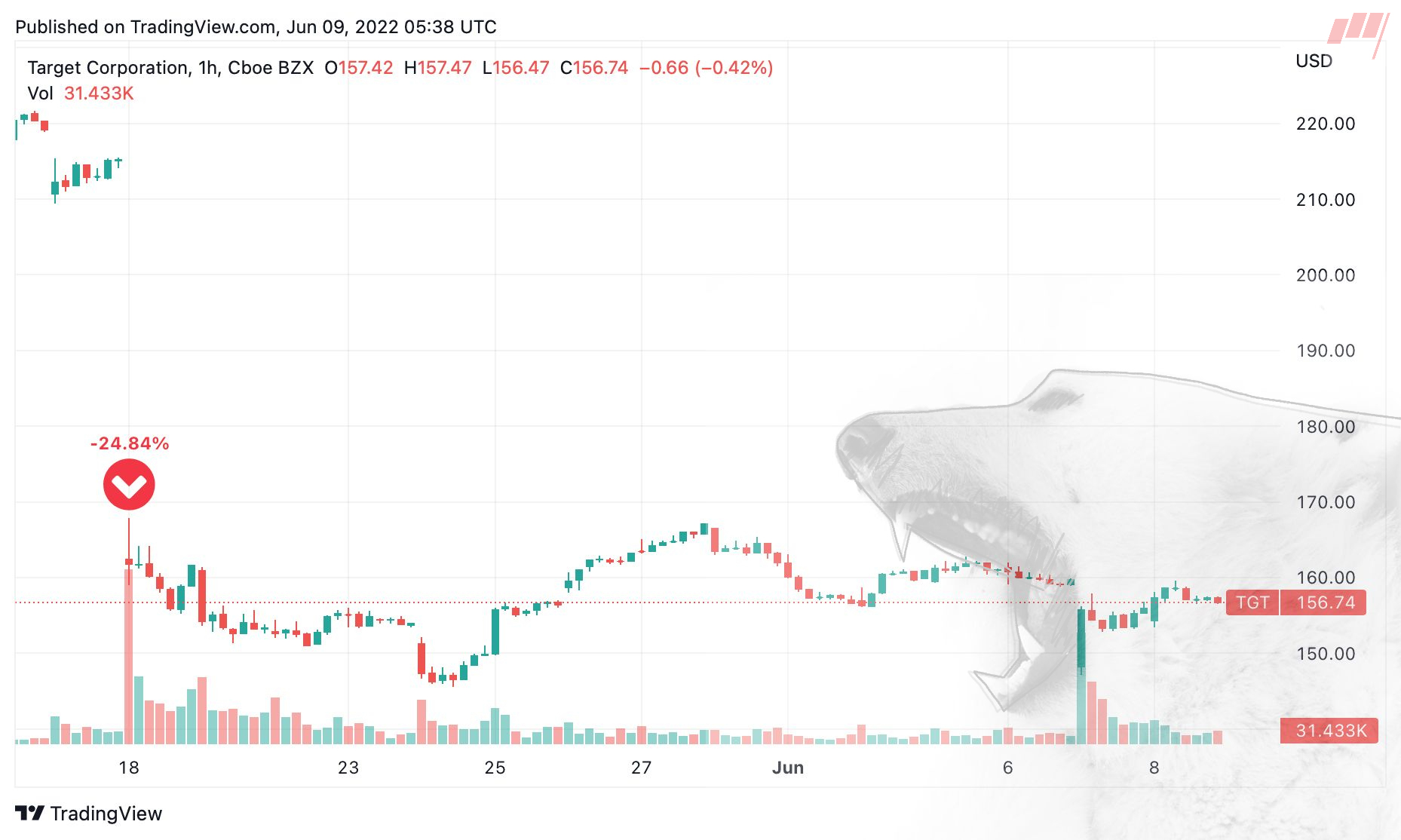 Target and Chargepoint had similar earnings results, but you wouldn’t know it by looking at the charts.

More curiously, it’s unclear exactly how these institutional traders called the bottom so perfectly. Prior to the recent run-up, Chargepoint was down more than 60% year-over-year. The electric vehicle charging stock still has a lot of ground to cover before it can return to its all time high of $49.48, but the past two weeks are a good start.

What is clear: By monitoring unusual option activity, traders can get a glimpse inside the minds (and wallets) of the Wall Street elite. These institutional traders can’t predict the future, but they have access to far greater resources than most individual traders, and a vested interest in being right.

That’s what makes unusual option activity such a powerful piece of market information.

Ready to start trading? Try Unusual Option Activity Essential. Learn how you can follow the “smart money” with a fresh UOA trade idea every week – including technical levels so that you know how to manage each trade!