Risk vs. Danger: Do You Know the Difference?

Risk vs. Danger: Do You Know the Difference?

In trading, with practice, we become very good at discerning the risk that we are taking to enter a position. Collect $2 in premium for a $5-wide spread? The risk is $3. Paying $5 for an at-the-money option? The risk is what you paid.

But risk is not the only thing that you have to worry about in trading. You have to know when a risk turns into a danger.

What’s the difference between a risk and a danger?

Risk is the fact that more things can happen, than will happen.

That is to say, we don’t know all the possibilities that could unfold in a particular scenario. Risk is the probability of loss that traders accept in exchange for a reward. Risk isn’t inherently bad or good, it just is. In trading, the only thing you have complete control over is risk management.

While a risk weighs the potential for a reward against a potential loss, a danger only exposes you to losses. To accept a danger is to accept a risk that carries little to no reward. Traders should seek to manage risk and eliminate dangers. But to do that, you first have to be able to identify the danger.

In order to spot potentially dangerous scenarios, you need to be proactive. That means knowing where your entry and exit points are before you enter a trade.

Let’s use a bullish call debit spread for example – consider a 100/105 vertical call spread that costs you $3.00 (risk) and has a maximum potential gain of $2.00 (reward). For the sake of the example, we’ll say the spread expires in two weeks. 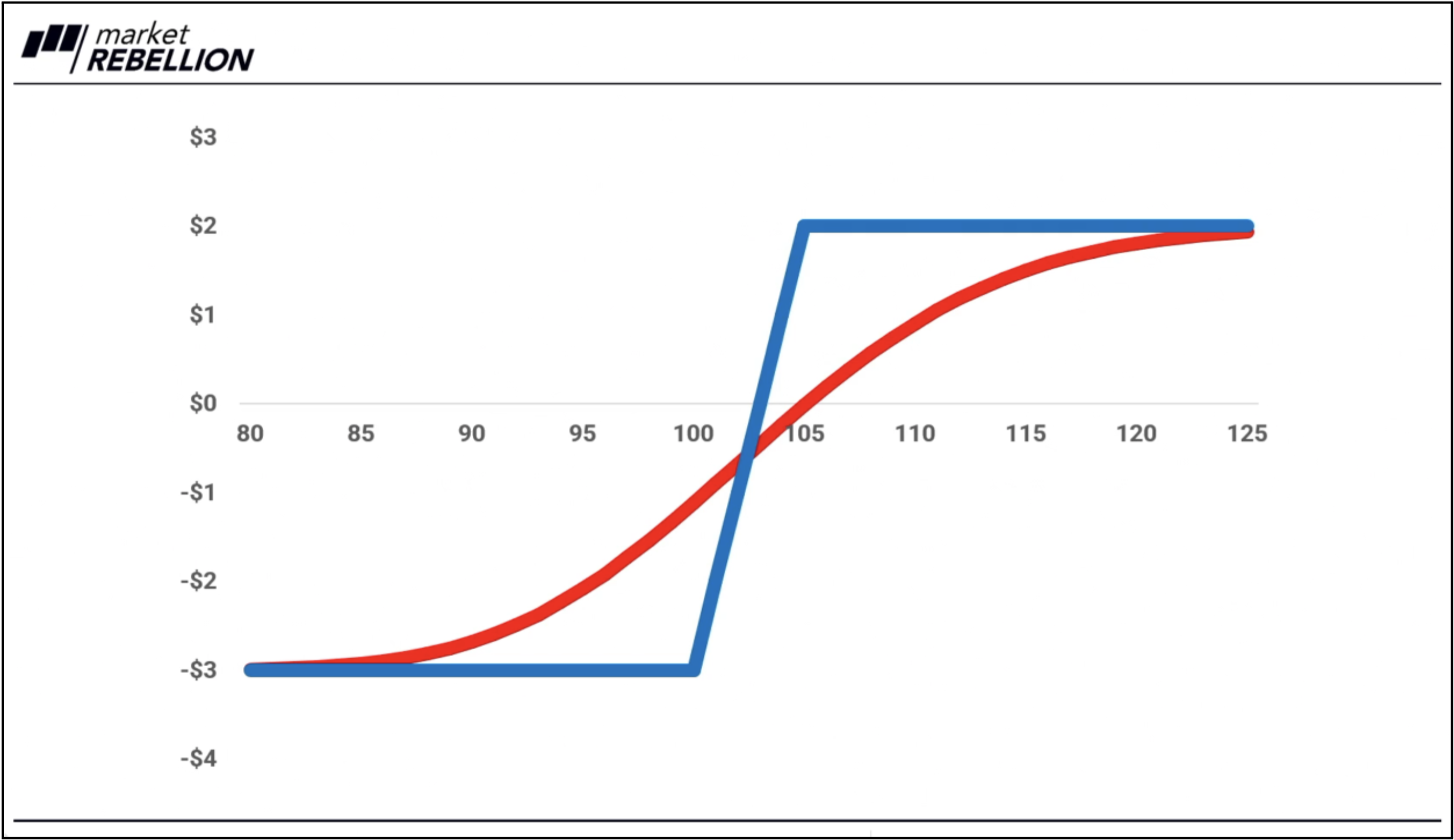 At the outset of the trade you were risking $3.00 (60% of the maximum value) to make $2.00 (40% of the maximum value). But what happens if the entire spread goes in-the-money as the underlying stock moves up towards $120? This would lead the spread to gain most of its max potential value (as indicated by the separation between the red and blue lines at price point $120).

Will you manage the trade?

Shown below is a graph depicting the value of the spread if the above scenario takes place, and the underlying moves to $120 with two days remaining to expiration. 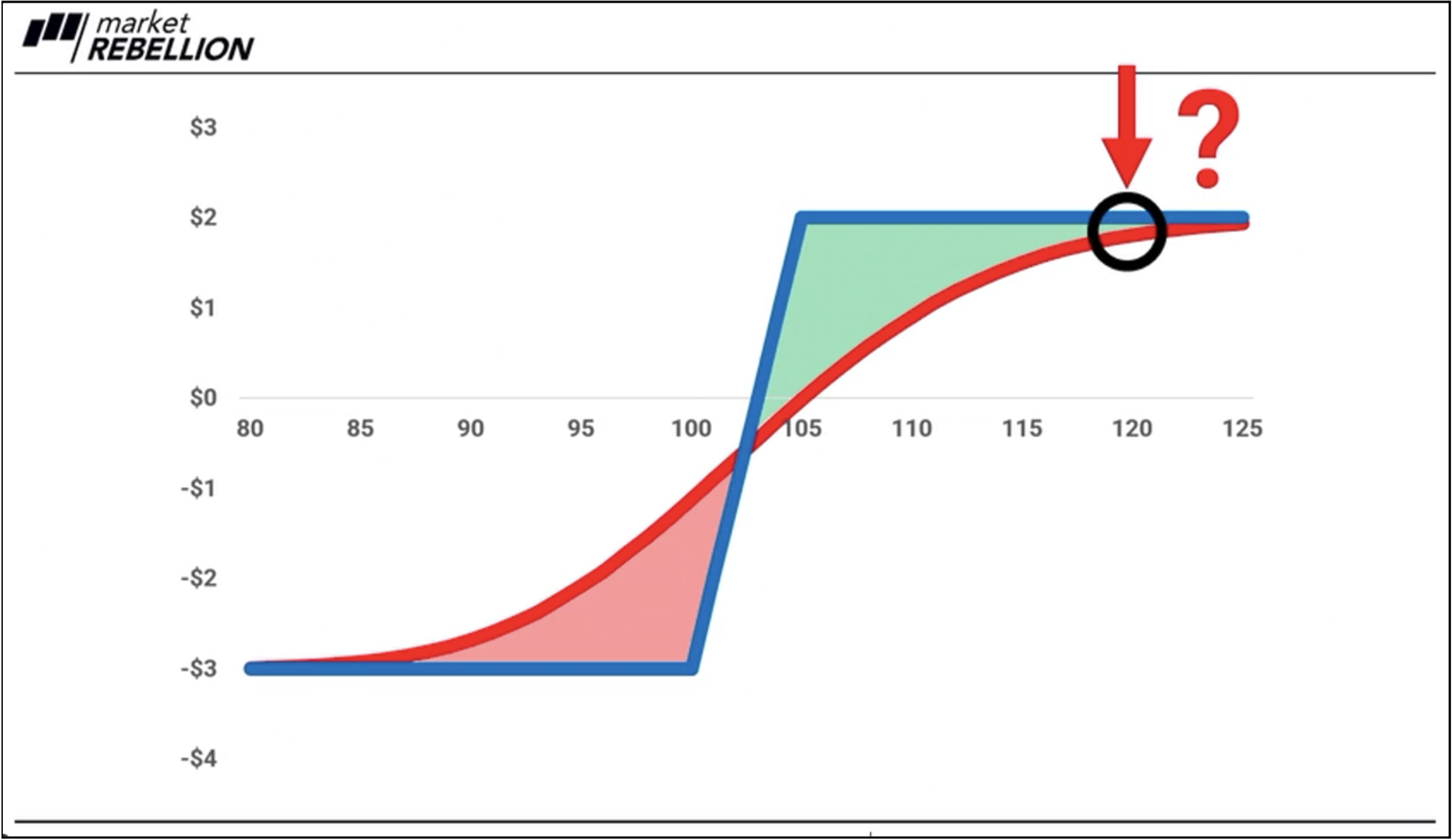 You can see the current curve converging with the expiration curve, lifting the value of your spread to $4.75. Remember, you initially risked $3.00 to initiate this trade.

So, has the risk-reward of the trade changed?

Professional traders don’t care about what the price they paid; all they care about is what the trade is worth now. If you paid $3.00 and the position is now worth $4.75, that’s $4.75 at risk.

Risk and reward are dynamic factors, meaning they are constantly in motion, flowing with other market factors. That brings us to the crux of our point. If you hold onto this trade…

Are you taking a RISK or are you in DANGER?

The answer, probably clear to you now, is that you’re putting your money in danger!

There are safer ways to make that 5%. If you still believe in the trade, it’s typically safer to roll out to a higher strike or later expiration. That allows you to take some profit off the table and reset your risk-reward ratio.

OK, that was an easy introduction. But what happens when the spread is larger or you own an option that has become deep in the money? How does risk become danger in those situations?

In our new example, we’ll again use a bullish call debit spread, except this time it’ll be a $100/$110 vertical spread. For the sake of this example, let’s assume the cost of entering the trade is $3.50.

What happens to the spread value if the trade moves to our upper (short) strike of $110 with 15 days left to expiration? 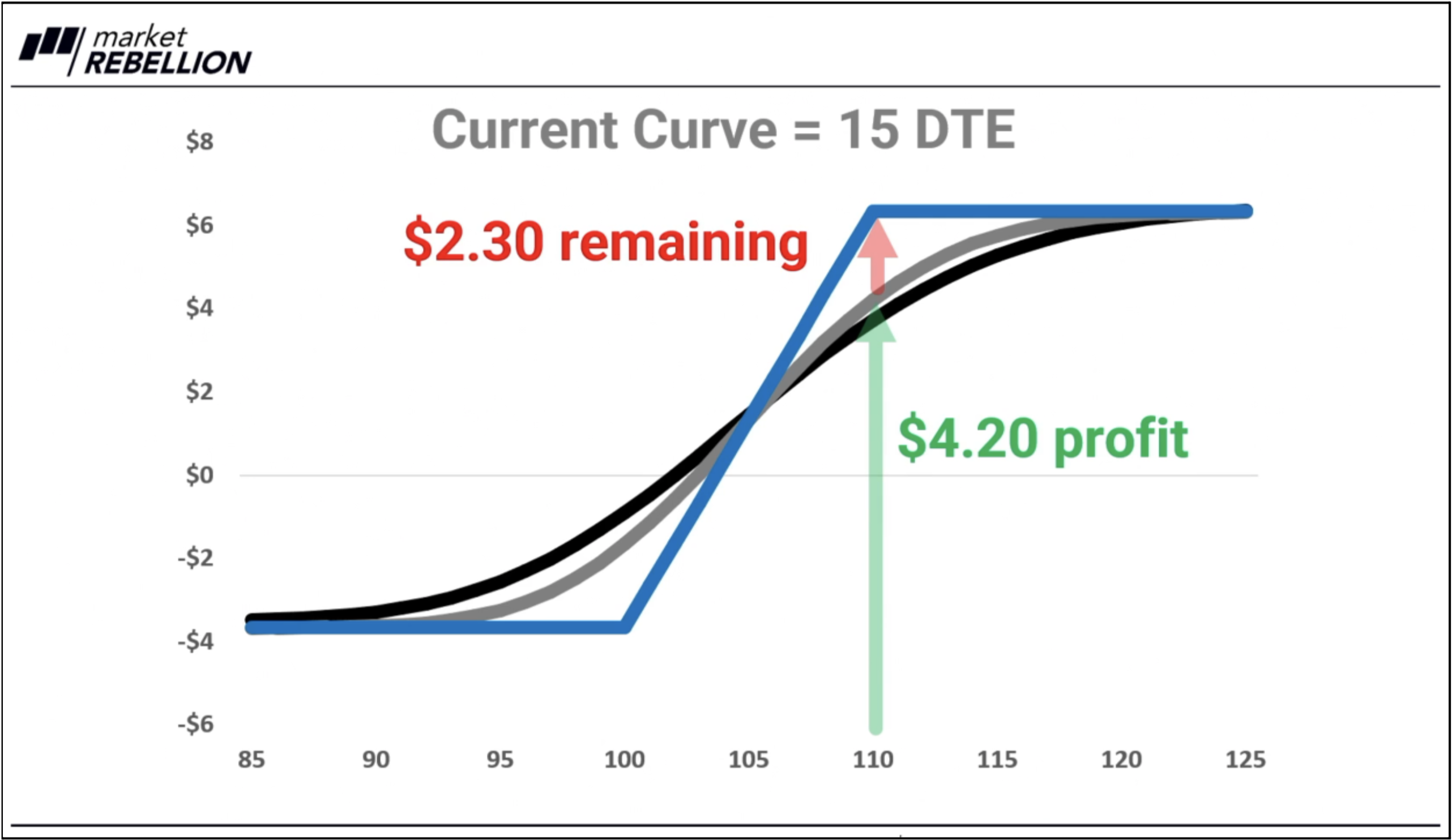 Looking at the graph above, this move would raise the total spread value to $7.70. Remember, the maximum potential value is $10.

You might say no, that risking $7.70 to make $2.30 is adequate risk to take. And in that, you wouldn’t be wrong. However, in this situation, there may be a hidden danger.

To expose that danger, we’re going to need to think abstractly about the components that make up the spread we purchased.

Take a closer look and you’ll see the danger is quite clear.

What do we call that? DANGER!

There’s no definitive line in the sand for what does and does not constitute a danger. It’s up to you to identify what risk/reward profile is most suitable for your portfolio and to manage your trades accordingly.

More important than whether you take profit at 90% of the maximum value or 98%, is that you do it consistently, and with discipline. Consistent strategies lead to consistent returns, and practicing discipline is what separates Market Rebels from the rest of the pack.