The S&P 500 is sitting on a knife’s edge. The September CPI report and the FOMC meeting to follow could act as a decisive catalyst in the battle between bears and bulls.
Source: TradingView, Market Rebellion

“We will look at the totality of the data.” – Jerome Powell

That clear focus on data-dependence places a heavy importance on the September CPI report, which is set to release on the 13th. If the CPI report comes in below-expectations, and especially if it shows decreasing inflation, the market will likely rally in celebration of the second below-expectation inflation print in a row. However, if the CPI report comes in above expectations it could pour water on the “peak inflation” narrative that some have begun to forecast, including investment bank Goldman Sachs.

The September CPI report will be fresh on the minds of Fed officials when they attend the next Federal Open Market Committee meeting, which will be held on September 20th and 21st. That FOMC meeting will be the first time since Jackson Hole that the market will hear from Jerome Powell, and after the heavy emphasis on his prior hawkish tone, a 50 basis point hike (rather 75 basis points) would likely be seen as a dovish shift from the Fed.

The result of the September CPI report is anybody’s guess. However, with the S&P 500 sitting on not one, but two converging levels of support, the result will likely lead to big market moves. Here are three technical levels to watch that could help forecast where the stock market is heading next.

Let’s zoom-in to take a more in-depth look at how these three levels became so important.

Discover how we leverage technical analysis to take advantage of the massive option trades that they want to keep secret in this free video.

Technical Timeline of the SPY ETF from June to September 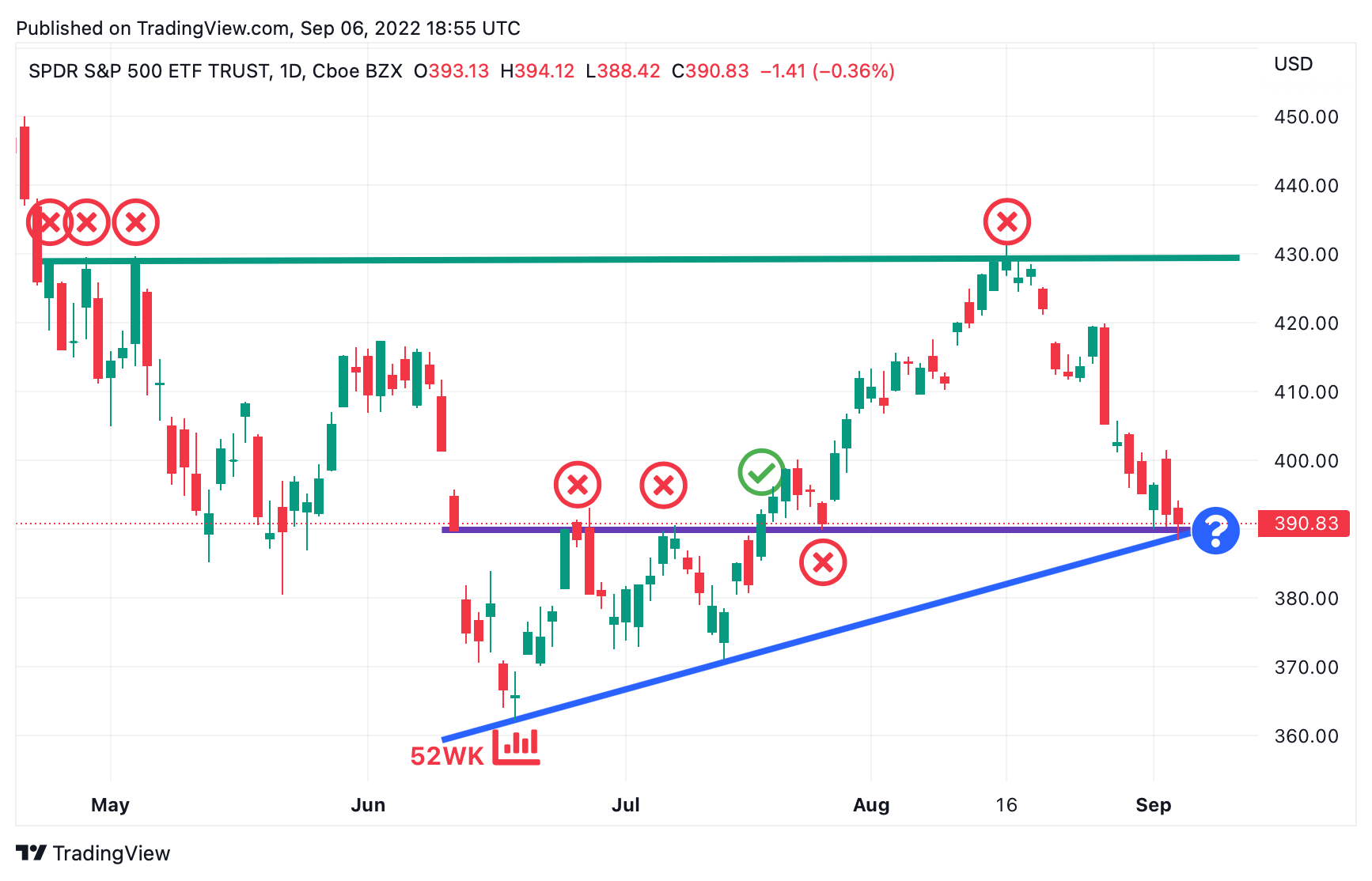 Will the September CPI Report Lead SPY to a Breakout, or a Breakdown?

Each time that the SPY ETF has decisively broken below (June 10th) or above (July 19th) the $390 level, it has created powerful momentum in the direction of the break. Now that the $390 level has converged with the June-to-September trendline, the level is likely to generate immense force on the next market catalyst.

Unless major news breaks between now and next week, that catalyst will likely be the September CPI Report. An optimistic read on inflation could be the motivator that the market needs to retest the 200-DMA and the August 16th high. On the other hand, a pessimistic read on inflation could be the spark that sets the market ablaze, quickly sending it back to the $362.17 June low.

Get instant reactions to the September CPI Report AND the FOMC Meeting when you virtually attend RebelCon 2022. Packed with the most industry-leading names in finance, like Fundstrat’s Tom Lee, Requisite Capital’s Bryn Talkington, Jon & Pete Najarian and many more — you won’t want to miss this who’s who of stock market icons. Lock in a virtual spot before it’s gone!